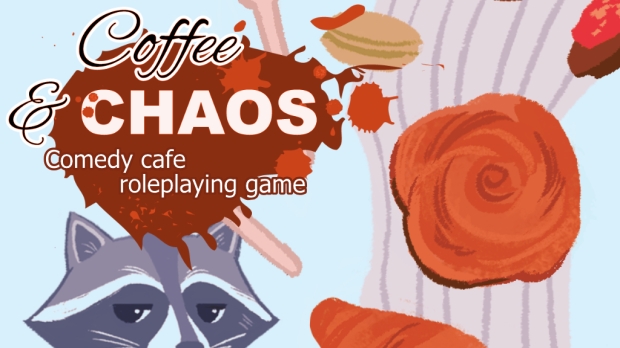 “The Coffee Machine broke 5 minutes after you opened so you’ve had to rebrand as a juice bar, but at least one of your group has a levitation spell so you didn’t have to use the ladder that tried to eat the rogue earlier.”

Coffee & Chaos is a new comedy RPG from CobblePath Games. Printed on a menu and offering lots of fun extras, it’s currently funding on GameFound until the end of June (CLICK HERE)

Okay, so we’ve heard the pitch, what is it and why should we be funding this? Well, you may remember, in what seems like aeons ago, I discussed Cobblepath Games’ remarkable LOCUS system as part of a Spooktober feature. Based on what I saw there, I’m willing to give anything they’ve put their hand to a looksee.

What I find particularly appealing is when this is pegged as something suitable for solo play as well as, importantly and I’ll try to explain why in a sec, short-session play.

Described as the fruit of two silly ideas, namely, “What if we made a café game and printed it on a menu?” and, “Oh and what if we used cutlery instead of dice?” one might be fooled into thinking this was nothing more than flimsy gimmick game. The fact that the concept was playtested, with lots of positive feedback, at last year’s UKGamesExpo should give a bit of comfort that under this madcap hood, might lurk a somewhat sensible resource allocation mechanic system.

Comedy is not an easy genre to do well, arguably more so than horror, so snappy rules that are quick to learn will be a must. Intriguingly, Coffee & Chaos is also intended to allow for use of pre-existing characters, so I presume if this lands well, it’s a concept that could easily be ported to other styles of fast play sessions; and it’s here that games like this can really shine.

Whilst gamers up and down the land seek out those mythical campaigns of in-depth character development and forging of groups that continue adventuring after decades of exploits, the majority of us accept that pick-up games and short arcs are invaluable. We’ve all been there in that scenario when someone can’t make it, or someone is running late, or ill etc. etc. Maybe its even just an off week as you prepare to switch games or whatnot.

In any case, sometimes what everyone wants and needs is something of a filler game. That’s not a bash. Some of the gaming nights I’ve enjoyed the most have been playing quote-unquote “filler” games. So, whilst I’ll happily continue to buy and invest in big campaign style RPGs I’ll admittedly never play, having access to great one-shot potential material is a must for me.

Suffice to say the concept has caught my attention (the artwork from Nimali doesn’t hurt either) so I’ll be keen to follow along. You can do so too by checking out @Cobblepath on Twitter, or by checking out the official Campaign Page on Gamefound.