This month, we’re celebrating Batman because we’ve got our hands on The Batman from Knight Models.  Not only that, but we have a copy of the new The Batman 2-player starter set for Knight Models Batman Miniature Game 3rd Edition up for grabs… AND the result of our Summer Staycation Stack giveaway!

Strap on your Batbelts, it’s going to be a big one!

This story-driven deduction game places you in the heart of Gotham, trying to solve a series of mysteries and presenting Commissioner Gordon with enough evidence to crack cases legitimately.

I do love the way Everybody Lies makes you assemble a comic, feeling like a cross between an Escape Room and Cluedo. However, it’s very wordy – there’s a lot of reading, which does make it feel like a story but interferes with the pace as a multiplayer. It would actually almost be better as a solo game, but again this is also a weakness: you really want to be playing as Batman, not one of the assorted minor characters – Catwoman (who functions as Batman to all intents and purposes) Vicki Vale, Harvey Bullock, or Warren Spacey (could they have picked a more obscure character?) 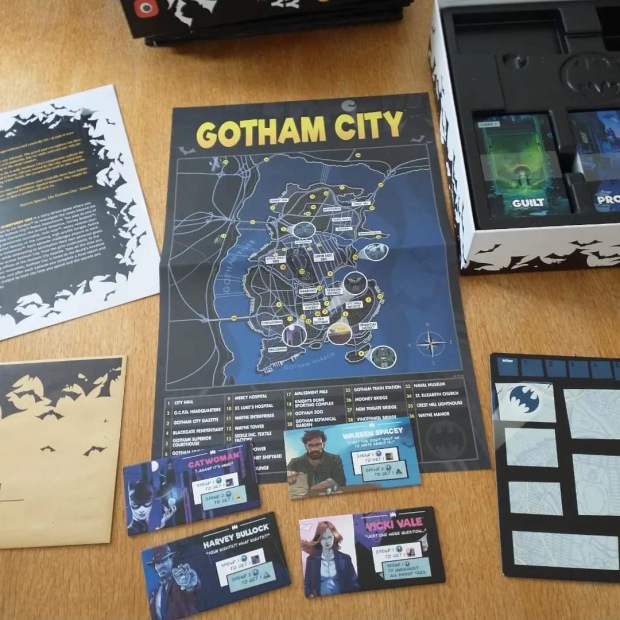 I think on balance I preferred Unlock as an IP / app driven experience. I love the Animated art style but that just reinforces that you should be the Dark Knight Detective. The App (well, interactive html) doesn’t really add anything that couldn’t be done through cards, and this could have all been condensed into more panel-style play to make something more unique. As it is, it’s a slightly uncomfortable mishmash.

The Dark Knight Returns Board Game 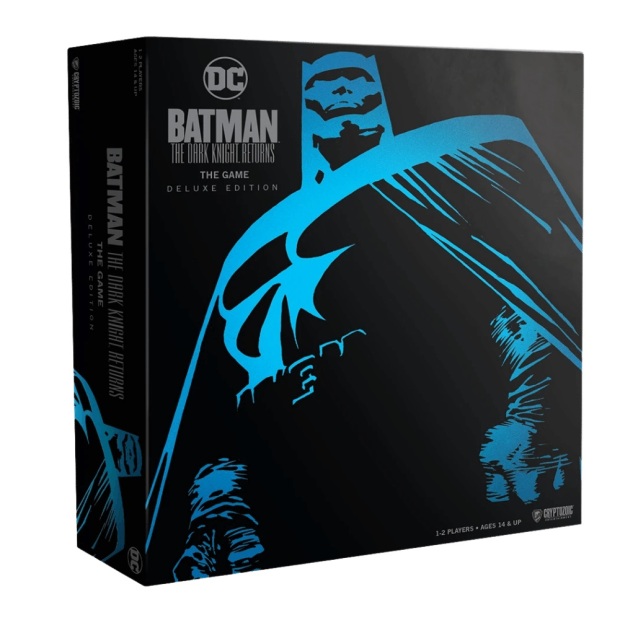 Now if you do want a true sense of the Dark Knight Detective as a solo experience, then Cryptozoic’s gritty board game is a treat (though it’s worth noting it can be played as a versus game also). Whether you go for regular edition (with cardboard standees) or Deluxe (with 17 miniatures, that are rather neat), you’re in for a great game. Out of the gate one of my favourite touches is that you can play the various missions as standalone is as a campaign, but one that feels almost like a legacy game: all of your damage, all the regret, carries over from one game to the next. It really imbues it with a sense of a Batman past his best, the struggle of old bone and tired muscle.

On the subject of Legacy, there are two areas where the game leans further into this: firstly, the way you have to constantly be juggling riots, preventing chaos from spreading, and beating down the big bad of the round is very like Pandemic. Also, you’re constantly annotating the board (albeit wipeably) so that feels very legacy as well, whether it’s number of enemies, new links between locations, or even just notes to yourself.

Each turn, you draw cards and try to counter the strategies of the enemy of the current “Book” (following the storyline of the comic) whilst trying to prevent the Doomsday clock ticking down to Midnight (got to say, the US President is particularly hilarious). It feels tense and thrilling, with each of the 4 books a solid, absorbing 1-2hr game. I love the upgraded dice with bat-wings, even if they feel a little retro/60s with their POW!s on, and would perhaps have liked more baggies for the infinite quantity of tokens – I’m not going to have my usual rant about tokens though, because this is a game that uses them meaningfully, and with the rich Miller art they are clear and vibrant.

As a solo Batman experience, Dark Knight is pretty unbeatable. It’s rich, gritty, and a lot of fun: you will, probably, beat it first time through and then replay on hard mode. I would tend to lean towards the regular edition rather than the deluxe as the minis are a bit too stylised for my taste and it’s quite a price jump, but each to their own.

The Batman: The Miniature Game 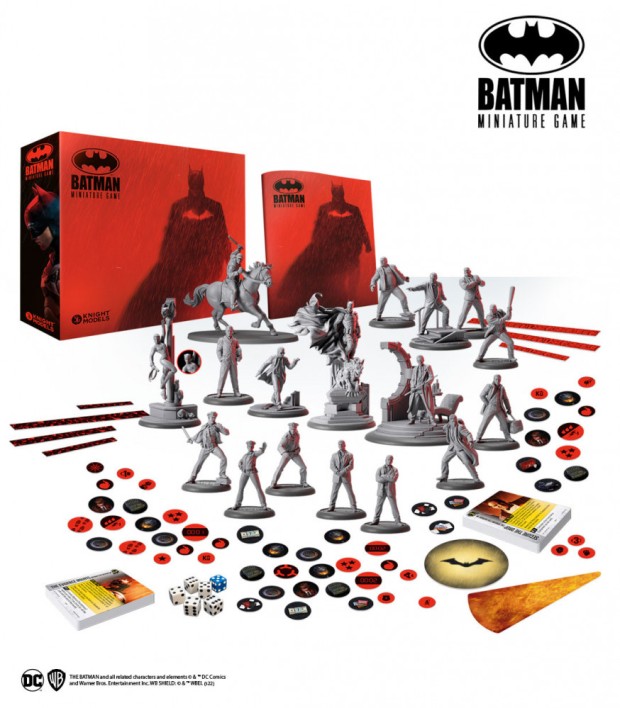 It’s been 2 years since Knight Models’ BMG 3rd edition shook up the game, but with the joy of Covid releases have been somewhat disrupted. Now, however, we’re getting a streamlined new boxset (let’s say version 3.1) with a wealth of new content. You can check out our original article HERE, but towards the end I’ll go over it with a reminder of the changes both old and new.

First of all, of course, are the minis. The two factions are The Batman / GCPD and Falcone / Organised Crime, though some cops will work for OC so there’s plenty in here. The 17 models included are in KM’s new thermoplastic used for the most recent wave of other releases, and having played about with all this is by far their best material: crisp detailing, minimal flash, not too flexible (a criticism oft levelled at the first wave of 3rd ed) and limited cleaning required. 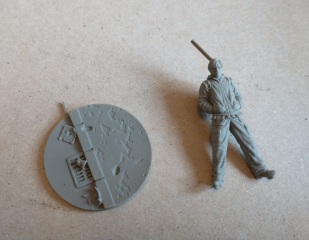 The sculpts are outstanding, particularly the Pat-man, mounted Police Officer and Falcone, although I have mixed feelings about the sculptural style of display bases as game pieces on a board. An obvious point of comparison is how much better these are than the ones mentioned above for the DKR board game: the level of detail on these is exceptional.

Let’s get my biggest criticism out of the way. The game’s character cards are now entirely app based… meaning that for practical purposes you have to print them. Whilst it means that you can regularly have updated, fixed and faqd cards (and this has often been a criticism about KM cards), I feel it adds a barrier. I like to have my cards, and my choices, spread in front of me; I’d rather pay a bit more and get the cards themselves.

You do, however, get the streamlined Objective deck (2 sets, in fact, one for each player), faction-specific Objective cards, plus Encounter and Event cards, which have been tightened up from the previous incarnations (though the old ones are not invalidated). The Plot deck, which really never gelled, has been removed entirely. The card art on these is great, really evocative, a mix of movie and classic comics. For objectives, you shuffle together a selection of faction specific objectives with your choice of generics, to make a 20-card deck, and initially draw 4 – and these are how you win the game.

I love that everyone’s now got their own way to win, and you never quite know what your opponent is up to. Not only that, but they can instead be spent as a Resource – burned for a temporary advantage instead (but you can only do this for 3 “points” of Resource total in the game) – trading off long term for short term gain. The Encounter cards allow you to pick or randomly determine a scenario and setup, whilst the Events are random, ongoing effects such as heavy rain, or Gotham in Flames.

In terms of other contents, you get all the dice, tokens, measuring sticks and templates required to play. Some of these are the same as previous editions, others are merely similar (for example, suspect tokens that reveal to be a particular objective), and some are entirely new. Crucially, it’s all there, and all are sufficiently distinct from one another. The red/black colour scheme is also a little easier on the eye than the yellow/black of the previous starter, in my view. The Suspect tokens, mentioned earlier, are clues, loot etc. that interact with these, and are typically specified on the cards: they may, for example, reveal to be Loot, Ammo, Poison Fish, Informants… and getting these may – or may not – be part of your overall Objectives.

In terms of rules, the major functional difference is that movement is now in inches, with your total movement (including from abilities) is printed on the card, which is a great improvement; for older cards, you simply add 4 to their listed movement stat. As an aside, Willpower is now used against Stun, Endurance against Injury (formerly Blood damage). One thing I really, really like is that your characters can make an “Effort” – take Stun damage to improve rolls (max. 3)

The turn sequence has undergone some modification, which may take some time to get your head round. With the demise of objective deployment, setup is now rather different. 2 sewers and lampposts per side, which get placed before deployment is determined. Fair enough, and speeds up setup. It’s then broken down as follows:

Take the Lead: Initiative is now a straight dice off.

Raise the Plan: Assign 4 Audacity Markers to your team. These are additional actions within a model’s activation, as they can now only ordinarily take only one action.

Execute the Plan: Players alternate activation, taking one action – either movement OR Attack OR Special (if they have a special ability) – unless you have an AUDACITY marker. It’s a really interesting switch, helps balance goon swarms against smaller lists.

Games last 4 rounds, so it’s quite a quick game as skirmish/wargames go.

There’s a lot of fairly intuitive rules as well, which means the game is very streamlined. For example, Skill Tests are now roll dice equal to Special stat, choose 2, looking for equal or less than stat. Perfectly logical.

Stun damage now tracks against Willpower, can be gained to add or remove dice from Attacks or Specials, and every non-KO model removes a stun at end of round. I love that you can “push”, feels very narrative, and the rapid recovery is likewise sensible.

Models can walk through other models, and knocked down models can get up as part of a move action, but count as impaired movement (-4″move) for that activation. All easy enough.

Ranged combat has some interesting mechanics. You can shoot beyond range and/or line of sight, but at reduced Rate of Fire, and similarly cover reduces RoF. The reduce RoF mechanics are perhaps less immediately obvious but are very quick in game as you’re simply taking dice away from rolls rather than having to calculate or make extra rolls in defence.

Overall, it’s a tight game that feels very like the comics with its renewed focus on narrative objectives. It’s not about squabbling over (arbitrary) targets with your opponent, it’s about achieving your goals and dealing with those that get in your way. I really like the feel of the game, and it’s a great value box-set that plays as an entirely self-contained experience. I do have some niggles, granted – a little flat pack terrain wouldn’t have gone amiss, and I really don’t like not getting the character cards – but it’s still a great product at a very reasonable price.

Right, so, want to win a copy for yourself? Dead easy. Riddle me this, riddle me that… no, wait, not that. Just tell me your favourite Batman character – hero, villain, or somewhere in between!

Let us know in the comments!

UK only unless you’re willing to fork out the postage, alas.

And finally, the winner of our last giveaway is… Ron Senior!

18 Comments on Geeking Out – Vengeance of The Batman!