Xmas is right around the corner – and of course, you’ve entered our Christmas Giveaway HERE, haven’t you, with over £300 of glorious geeky goodies to win? No? Why not?

Well, as you’re here now, why not grab yourself an extra entry with our little look at what’s set to be the hottest new game of 2023.

Star Wars: Shatterpoint (SWS) coming next Summer from Atomic Mass Games, makers of Marvel: Crisis Protocol (MCP) – speaking of which, there’s some exciting releases on the horizon there also, as well as for Knight Models’ new Assault on Arkham game, coming to Gamefound early 2023.

What do we know so far about Shatterpoint? Well, not a huge amount beyond it’s a skirmish game set in the Clone Wars era. We’re looking at a fairly large physical scale for the models: 40-42mm, hard plastic. Now Atomic Mass kits have gone from strength to strength recently, particularly in the most recent Hydra and Shield waves, with the gapping that plagued some earlier releases far less of an issue. This will make it far easier to justify the cost – let’s face it, going by MCP prices, it’s not going to be cheap, but you’re going to be getting your money’s worth I reckon. Also, I want those new bases for a bit of a MCP variety…

Obviously, we can expect dynamic poses and expressive, evocative face sculpts, but it’s interesting to see them really lean into the animated aesthetic of Clone Wars – I, for one, am a real fan of this. I also like that it’s not simply an up-scaling of Legion (their Star Wars 32mm mass-battle game) but rather a whole different beast.

Also, the very fact that SWS is a true skirmish game means it’s doing something we’ve not really seen before in a Star Wars game – yes, Imperial Assault is a narrative campaign with skirmish elements, but it’s far more a Rebellion-era board game than true tabletop gaming experience. Whilst they’ve said it is a very different game to MCP, battles are still going to be objective-driven, although it’s not yet clear if that will be traditional TT objectives or thematic, like MCP – but I suspect a mix of the two.

Let’s take a look at the starter set contents: 16 models, two sides each with two sub-factions. You’re getting an interesting mix with the focus being on Mandalorians – clearly channeling the Disney+ crowd, but that’s no bad thing, and the jetpacks are particularly lovely (though I don’t relish painting Bo-Katan’s helmet details!) The Ahsoka is great, classic pose albeit nothing new (it’s practically identical to the one we see in both Imperial Assault and Z-Man’s (excellent) Pandemic Star Wars), but having it at that scale will be a treat. The Anakin pose, with the hand thrust out using the Force almost carelessly is wonderful, and the clone troopers are suitably… similar :D

In the villain half, the Gar Saxon is a real stand-out for me, though the Maul pose is great too. Asajj Ventress is a lovely sculpt but I’m not totally sold on the pose – blocking doesn’t scream impatient rage to me. I really, really like the droids being several to a base (roger-roger-roger) – but then I’m a big fan of grunts and the like in MCP. I’m a wee bit disappointed that it’s General Kalani not Grevious in the starter, but I suppose you have to save some big-ticket items for later, or at least separate release.

It seems like that the price tag on the starter will at least be comparable to MCP ($99.99 / £89.99) and whilst there’s more minis (16 rather than 10) there doesn’t seem to be any plastic terrain included (I’m not saying that I wouldn’t like some for Force users to chuck, mind you) so that would enable the price to be comparable, given tokens, dice, rulers etc are included. Character boxes are likely to be similar to MCP also, averaging $25/£20 per fig – so comparable to a GW character model, though obviously you’ll need fewer for SWS (and I’m SURE you won’t just buy them all, honest!)

We’ve also had some amazing terrain previewed: you can finally have the High Ground!

But if you’re more of a card gamer, fear not (after all, to the Dark Side that leads) as you can Battle for The Galaxy with Star Wars: The Deckbuilding Game!

In this head-to-head duelling game, you attempt to build power to destroy three of your opponent’s bases before they do the same to you!

You start with a generic, faction-specific 10-card deck. As a deckbuilder, you’re drawing from a common card pool; both players can purchase neutral cards, whilst (obviously) only you can purchase from your own faction 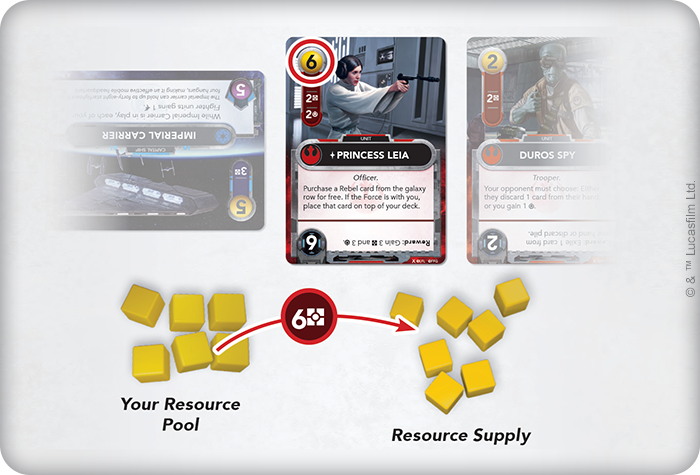 Whoever controls the balance of force also can access additional card effects! The Light side begins dominant, but the Empire have the first turn and can quickly wrest control, making early choices critical. 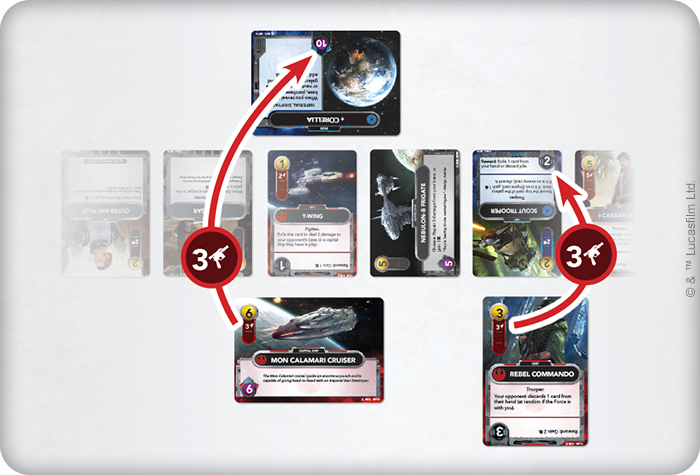 Attacking your enemy and destroying their cards gives you rewards; there’s lots of familiar FFG iconography so the game will feel immediately accessible to anyone familiar with their take on the Lucasverse. Look out for the game, and of course our review, in March 2023 – and may the Force be with You!

Talking of Marvel Crisis Protocol (we were, just a minute ago, honest) we’ve got a few juicy titbits headed this way at the start of the year (and indeed right around the corner).

Coming in hard at the end of the month is the next Rivals: Comic Display panel, Wolverine vs Sabertooth.

As well as being great sculpts (cowboy hat! motorbike!), these are entirely new versions of the characters – great to hear Atomic Mass taking on feedback from the community from Doc Ock vs Spider-Man.

We’re also getting repackaged Brotherhood and X-Men packs alongside this and the new Blob/Pyro sets (reviewed HERE), releasing this month.

On the subject of Rivals (well, ish), we’re also getting Red Skull in a FRIKKIN HYDRA TANK! This is both an Ultimate Encounter and a Terrain Piece for maximum playability (*cough* quinjet *cough*). This is going to be SPICY! I’m really excited for more Hydra goodness (well, not good, but you know what I mean) and this is going to be cracking centrepiece to the collection. But that’s not all – we’re also getting a Hydra Power Station and Turret! 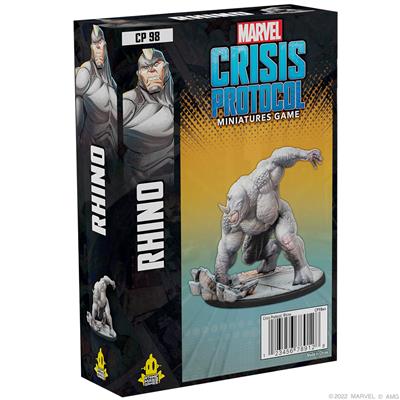 Rhino is the first big tease we’ve had, and let’s face it, that sculpt rocks. Hoping for a Spider-foes version of the Juggernaut (and hoping he’s not just a Blob reskin, given how hot on the heels he’s coming) – Spider-Foes look to be getting major boosts in ’23, as one of the more lack-luster factions generally, with rumours of Vulture, Scorpion Hobgoblin and more besides! Tombstone! We Want TOMBSTONE! Let’s face it, Foes really need a new/buffed leader.

And you can’t have Spider-Foes without more Web Warriors.

Web Warriors affiliation pack, no less, PLUS a tease of Agent Venom and Spider-Woman !

I know that Spider-Woman isn’t technically part of the LoomWeb, shush, but still, she’ll be a great addition. Also, Agent Venom will likely be an excellent boost to GotG (I suspect we’ll get a new faction repack for them, too) and Spider-Woman will likely be both Shield and Hydra – though the packaging also teases the New Men, and given that we’re going to be seeing High Evolutionary on screen soon enough (and we’ve had Cthon pop up in MoM), could this mean Knights of Wundagore round the corner? I know I’d love a White Tiger for my Defenders! Stay tuned, true believers, for more idle speculation!

Of course, what would our Marvel previews be without some Marvel Champions TCG? In February we’ve got the X-Men’s greatest card-carrying couple coming, sugah: Gambit and Rogue!

I’m marginally more excited for Gambit, as his card manipulation abiltiies look really exciting, but I suspect I’m underestimating how useful Rogue’s trait stealing will be. PLUS, we’ll also be getting the next 2 parts of the mysterious new scenario-pack based campaign that MojoMania (out this month in the UK) begins!

But it’s not all Marvel, we’ve got something deliciously DC round the corner with Batman: Escape from Arkham Asylum from Knight Models, on Gamefound January 24th 2023 (CLICK HERE). In this board/mini semi co-op, you’ll be playing a classic Bat-foe trying to escape the notorious Asylum (and the Bat!) – perhaps helping other players, but ultimately trying to save your own skin!

With some stunning models (let’s face it, Knight’s sculpts never disappoint), and an interesting hex-tiled board, this looks to be an interesting take on the Bat-franchise – we’ll be sure to check it out!

So, for that bonus entry, just let us know what you’re most looking forward to in 2023, from the above or beyond!

And remember to check back on 2nd January for the results of our Great Geeky Giveaway 2022!

4 Comments on Geeking Out 2023 Preview – Star Wars Shatterpoint, Deck-building, Marvel Madness and beyond!