Anything related to comic book properties on the small screen.

Warner Bros have confirmed that Vincent Kartheiser (Mad Men, Angel) will be playing Dr. Jonathan Crane – AKA Scarecrow – in the upcoming third season of [...]

As part of the annual Superbowl entertainment blitz, Marvel Studios have dropped a brand new trailer for their upcoming The Falcon and The Winter Soldier series. Starring [...]

After a painfully long wait, we finally have our first casting news from the eagerly anticipated Netflix adaptation of Neil Gaiman’s iconic comic book series, The [...]

Marvel Studios have just dropped the first trailer for [...]

As part of the Titans Hall of Heroes panel at DC Fandome, it was confirmed that Jason Todd (Curran Walters), the current Robin, will be fulfilling his comic book destiny and [...]

As a diehard fan of the original Transformers series and the 1986 movie, it shouldn’t surprise anyone when I say that Michael Bay’s take on the waring robots was a [...] 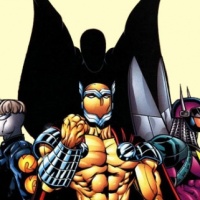