As part of our ongoing quest to bring you the best interviews from todays most exciting artists and writers, the Big Comic Page was fortunate enough to be able to conduct an interview recently with acclaimed comic book writer and author, Paul Tobin.  And rather than run down his resume here, we’ll let Paul fill you in on that himself.  Here’s what was said;

BIG COMIC PAGE: First off Paul, thanks for taking the time to talk to us.  Now, for those of our readers who might not be familiar with your work, just who is Paul Tobin?

PAUL TOBIN: I always have trouble describing myself. I think the terms I’m most comfortable with are “bald” and “writer.” So… “bald writer,” I guess? To be more specific on the “writer” part, I’ve written a couple hundred comics for Marvel, many of them in the “Adventures” line, where I found that I was actually able to MORE let loose with real storytelling than in the mainstream, where I played around quite a bit as well. I’ve done graphic novels such as Gingerbread Girl and Banana Sunday with my wife, Colleen Coover. We’re currently working on an online comic called Bandette, which may be the most fun I’ve ever had in comics. I’ve written a novel, Prepare To Die!, and am hard at work on more novels, as I definitely want to further expand into prose. There are three more graphic novels in the works. I’m doing horror comics now (a real love of mine) such as Colder, at Dark Horse. Overall, I’m expanding much more into creator owned works. I LOVE working on Spider-Man, Superman, Batman, Hulk, and all the others, and I’ll continue to do so, but at the end of the day it’s nice to actually have the final say on a story.

And, to be more specific on the “bald” part of “bald writer”… I don’t have any hair. 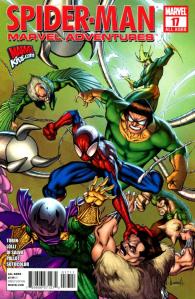 BCP: You’ve had an extremely prolific career at Marvel, primarily as part of the ‘Marvel Adventures’ title. For people who are unaware, Marvel Adventures is aimed more at younger readers, and features stand-alone storylines rather than longer arcs. Did you ever find the self-contained story format limiting in any way?

PT: The funny thing about writing is that basically ANY way a story is formatted… it’s limiting… BUT… it’s also a way of opening up other aspects. Any time a writer has an obstacle in his way, he has to figure out a way around it, and that can lead to some interesting solutions. Well, it SHOULD. Besides, I snuck in a few “continuing” story cheats in my own writing on Marvel Adventures, letting characters build in a way that would lead to stand-alone stories. I think if a writer lets his scripts breathe in organic ways, it’s all good, because even if it’s a series of “one-shots” the regular life of a well developed character binds it all together.

BCP: In your time on Marvel Adventures, you had the opportunity to write for pretty much every major character in the Marvel Universe, including Spider-man, the Fantastic Four, Hulk, Iron Man, etc. Is there any character – not just in Marvel, but in comics as a whole – that you haven’t had a chance to write for but would really like to?

PT: There are SO many characters I still want to write! A friend of mine just got a gig on a Thunder Agents book, and I’m jealous of that. And then there’s the Demon at DC, and Ragman. Hmmm, the Eternals. Legion of Super-Heroes. There are characters I’ve barely worked with that I’d love to do ongoings with, such as Lois Lane, Catwoman, Batgirl, Jimmy Olsen, the Marvel Family. And I’d even love to work with Betty & Veronica and the whole Archie gang. If I could do a comic with Sherlock Holmes and Nancy Drew, I’d be pleased. There are a lot of “pulp” characters I favor as well. I could make this list so long that people would fall asleep looking at it. 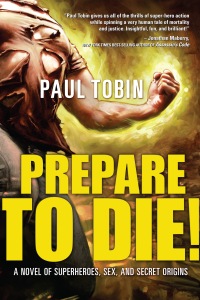 Prepare to Die offers an interesting slant on the old super-villian cliche.

BCP: Moving away from comics for a moment, you recently published a novel entitled ‘Prepare to Die’ in which a young superhero takes the age-old supervillain threat literally and spends two weeks getting his affairs in order and ‘preparing to die’. How did that idea come about, and how did you find prose writing compared to the comic-book format?

PT: It’s an interesting change. When I’m writing for comics, I’m reliant on the artist for so many things, but with prose I’m alone. It has its ups and downs. With comics, you’re presenting the whole package in tandem with an artist, but with prose, I almost feel like I’m providing clay, and interacting with the reader in order to build the world. So much of world-building goes on in a prose-reader’s brain, so it’s more an art of guiding readers to what you want them to see… whereas in comics, I’m guiding my artist towards that, and then we present a unified world. I can go back and forth between the two tasks pretty easily, now, I think, but when I first started working seriously on both comics and prose at the same time, it was nearly a day of transition time between the two.

Gingerbread Girl, one of Paul’s many collaborations with his wife, artist Colleen Coover

BCP: You’ve collaborated with your wife Coleen on several creator-owned projects including Banana Sunday and Gingerbread Girl. The writer/artist dynamic can be a fairly volatile one at times, so were there ever any tensions that arose out of working together like that?

PT: Not any more than with a normal team. A “I’m not married to you and sleeping with you tonight” writer-artist team. I think it’s because although we are married, and we do tuck into bed together each night, even when I’m working with Colleen I don’t show her scripts until I’m completely done… same as with any other artist. With our current “Bandette” project, Colleen doesn’t even look at the next script until she’s absolutely finished with the previous one. So… we’re married, but have very separate lives artistically, even when we’re working together.

BCP: One of your most recent projects is ‘Colder’ under Dark Horse, a title which I have been absolutely raving about on BCP since issue one and which recently concluded its five-issue run. What prompted the switch to the horror genre?

PT: A love of horror. I’m a big fan of Korean and Japanese horror movies, the ones that don’t as much scare you as unsettle you. I wanted that in comics. I grew up reading horror comics (chiefly the Warren horror magazines, Creepy and Eerie) and have a great fondness for the craft. And, I’d done so many all-ages comics that I was hearing others talk of me as “the all-ages writer” rather than “the writer”… and I needed to put an end to that. There are so many types of writing I enjoy doing… I never want to be considered as one type of writer, any more than I would like to only read one type of writing.

The chillingly disturbing cover of Colder #1

BCP: Colder has a very distinct visual style, including some of the most amazing (and traumatising) covers I’ve seen in a long time. Did you have any influence in the artistic style of the book, or was that solely down to the artist, Juan Ferreyra?

PT: At first I really tried to steer the art into the spaces where I wanted it to be, but it soon became apparent that Juan was REALLY good at what we were doing. So, while a script for the first issue might say, “Juan, in this panel, do this and that, and make sure of this other thing, and have the characters doing this, and the feel of it should be this way, and make sure of X and Y, etc, etc.”… the scripts for the later issues were just simply, “Juan… do your thing.” Juan and I are continuing to work together on two or three upcoming projects, and I’m super pleased to continue the team. There are so many creepy-wonderful things in my art files these days. Some really good stuff ahead.

BCP: It’s safe to say you’ve written for both ends of the age spectrum, from the Fantastic Four judging a beauty pageant to Nimble Jack emerging from someone’s mouth, tearing them apart in the process. Do you prefer writing the lighter-hearted, family stuff or the more adult content?

PT: I don’t think that, overall, I really prefer any one type. I have times when I do, but it’s no more than a mood. Same as anyone. Sometimes you want to read an adventure book. Sometimes you want to read a horror book. Sometimes a good old fashioned superhero battle-fest hits the spot, and other times it’s deep characterization or a light-hearted romantic romp, and so on, and so on. It’s just, when those moods hit me, instead of wanting to just read them, I sit down and write them.

BCP: And finally, what can we expect to see from your in the future, and do you have any plans to visit the UK?

PT: I’d LOVE to visit the UK. Just need some wonderful convention organizer to zoom me on over. And, as far as what I’m doing in the future, I’m in a lot of areas right now. I’m doing more horror work for Dark Horse Comics, and, let’s see… I think four different projects with them. Colleen and I will be doing the Bandette comic for as long as possible. I’m doing work for video games. There are three graphic novels on the way. A bit more from Marvel and DC, and a few other companies. And there’s always the prose, as at least two more novels are in the ending phases right now. Lots of other projects as well. I do love to write.

BCP: Thanks for taking time to chat with us Paul, and speaking personally, I can’t wait to see your next horror offering.