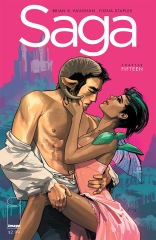 Commence Gushing! There’s not much more that came be said about this book that hasn’t been said about previous issues. It might well be the perfect book, BKV has created such a rich world for the story to take place in that it seems perfectly reasonable for the first part of the book to feature the journalists recently introduced trying to find out about Alana in the middle of a battleground.

The amount of detail that goes into every aspect of the story is astounding, the very fact that the ever expanding cast is given a share of the spotlight, but for it not to seem overbearing is refreshing in a time where supporting characters are more often than not reduced to barely functional cardboard cut outs.

Fiona Staples art continues to astound me and art really is the only word that can be used to describe is, as any page in the book wouldn’t be out of place in a gallery and the expressiveness of characters faces says more than a thousand words. The use of colour is also seems integral as even the background of the world where the Will is gorgeous looking.

Saga is one of those books that anyone who reads instantly falls in love with, and I think it has something to do with how relatable  it all seems, from how a family operates after a bereavement, so dealing with the loss of a loved one, to accidental hallucinogen ingestion. It all seems real. It’s a story you want to be a part of and know what’s coming next, that almost is like a drug as when it goes on hiatus I feel like something is missing every month. If you’re not getting this book already then take it from me, it might be a drug, but it’s one of the good ones.

Chris Bennett
Article: I Hate It Here
You can also find Chris on Facebook