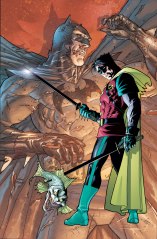 Okay, so let’s get the obvious points out the way first; right from the get-go, Damian: Son of Batman finds itself in a bit of a continuity black hole.  This particular version of Damian doesn’t quite seem to fit in anywhere.  He’s older than the Damian we’re used to, and the events of his past don’t seem to gel with either the Morrison or the New 52 versions of the character.  And, as a result of this, some of the characterisation does seem to be a little ‘off’ in places.

However, once you  look past that and start taking this four-issue series as the alternate reality/elseworld/what if? tale that it’s clearly meant to be, there’s definitely a lot to enjoy here.  Firstly, the artwork is absolutely fantastic.  Despite the occasional wonky-looking facial expression (with a prime example coming right on the very first pace), Kubert puts together some absolutely stunning moments and exhilarating splash pages, and his detailed, dramatic style comes to the fore throughout this story.

His writing on the other hand, while solid enough, doesn’t quite do the story justice.  Some issues are glossed over unnecessarily, and even what should be poignant, world-altering character moments come across as almost superficial in places.  That said, the idea behind the series is a solid one, and with the groundwork Kubert has laid in this first issue, the potential is definitely there for what should be an interesting investigation into just how Damian could have ended up as the dark, violent character we saw all the way back in Batman #666.

This first issue is worth buying for the artwork (and one or two extremely exciting character moments), and hopefully the writing can pick up the pace in the remaining three chapters and make this series something truly memorable, rather than just a slice of (admittedly delicious) eye candy.