One of the best things about IDW’s X-Files Season 10 books is the return of The Lone Gunmen. Byers, Frohike and Langly deserved far better than their pointless death in the TV show, with the scope for the further adventures of the geeky trio potentially as limitless (if not more) than Mulder and Scully themselves.

This spin-off more than does them justice, despite featuring a concept that even the most hard-core conspiracy nut would find unlikely.

After receiving an email detailing a coming apocalyptic plague, with details seemingly sent from the future, The Gunmen set out to investigate the various urban legends mentioned within. These legends will bring them into contact with Ghostbusters, The Crow, Transformers and in this issue, the Teenage Mutant Ninja Turtles.

It could be ridiculous and on a certain level it is, but writer Ed Brisson plays it absolutely straight and it works beautifully. A town infested with pizza-poisoning vampires brings together all the plot elements neatly, with just the right balance of humour, horror and action to satisfy fans of both titles.

After his gorgeous work on the early issues of Season 10, the brilliant Michael Walsh is back on top form here, his Michael Lark-style scratchiness still perfectly capturing the essence of each member of the cast, who are always instantly recognisable.

Some of these mash-ups sound stupid it’s true, but the execution is anything but. This is already shaping up to be something really special indeed. Let’s hope they can keep it up. 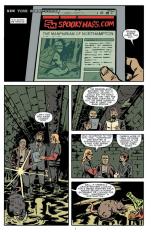 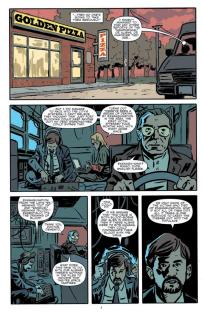 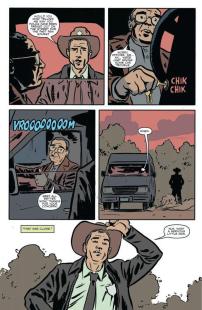