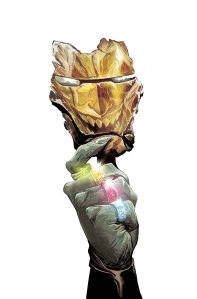 I’m not going to lie, I only picked this issue up for two reasons; One, I’m having a massive boner for Gillen’s writing these days and wanted to take advantage of the new jumping-on point that Marvel are so keen on giving us these days, and two, you get a free digital copy of the first trade with this issue. And who doesn’t love free stuff, right?

So after buying a book on a whim, and knowing absolutely nothing about where the run has been going since the relaunch, I went in with a totally ‘blank slate’ approach. It’s safe to say that I was pretty goddamn confused at first, what with Tony mentioning that he’s adopted and has a brother that is also a genius. However all that was just subsidiary information and didn’t detract at all from the main story which is centered around the Mandarins rings taking on new hosts in a very Green Lantern-esque move.

Gillen’s writing is as solid as ever, and it’s awesome to see a writer have such a fluid way of writing that it seems that he was born to write pretty much every book he does these days. Stark is exactly what you’d expect him to be, with just enough humour and terrible jokes (the entire musical scene was gold), interspliced with the genius business man we’re all familiar with. That being said though, it does seem like a bit of a cash-in having the dark elves from the recent Thor film making an appearance, where surely there was some other race that could have been just as well suited. That being said though, I trust that there is an overall arc in place that will make sense by the end.

Luke Ross is on art duties this month and I have to say, he really does draw a lovely Iron Man suit. The familiar Red and Gold that has been the IM colour scheme for so long now has been gone since the relaunch, and while it does seem to look a bit more “edgy”, I’m not sure thats the true intent, it’s just a different take on the suit design and I like it! Another design touche that really worked for me, was the Dark Elves dancing/fighting with blades on their feet, and Ross really smashes it with his faces in this issue, showing an amazing attention to detail.

Not much else to really say about this one, other than;

It’s safe to say I’m now official a convert, and will be picking up the next few to see where the story takes us, and I urge you all to do the same. You won’t regret it!