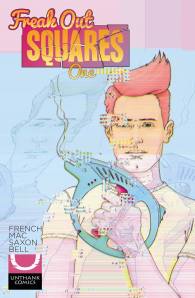 The latest offering from Glasgow-based Unthank Comics, Freak Out Squares is a comic that deals with the reality behind our icons and idols, and examines what happens when we find out that they aren’t quite what they appear to be. Or at least, that’s a sizeable chunk of this multi-layered tale that’s equal parts biting social commentary and equal parts sprawling sci-fi conspiracy.

There’s a lot going on beneath the surface in this one, primarily surrounding hedonistic idol Johnny Orion. A face-painted, six-pack flaunting, revolutionary musical visionary, it rapidly becomes apparent that there’s a lot more to Orion than meets the eye, and as we delve deeper and deeper in the truth behind the man himself, we find ourselves drawn into a brilliantly inventive (not to mention fairly relevant given today’s culture of manufactured celebrity) world.

Harry French’s writing remains as sharp and confident as it was in last year’s Master Tape, and his gift for realistic dialogue that manages to tell the story without bogging it down with exposition shines through once again. As with Master Tape, this is a series that deals primarily with the vacuous nature of the music industry, although this one comes at the topic with a far more cynical – bordering on downright criminal – approach.

The art duties are handled here by the always impressive Garry Mac, whose distinctive character designs and creative page layouts infuse this book with a sense of frantic energy as the story surges forwards at a breakneck pace. The more I see of Garry’s work, the more I’m loving it, and it’s great to see him once again given a wide variety of different characters and situations to work his magic on.

However, as confident and dynamic as Garry’s artwork is, it is Harry Saxon’s psychedelic colours that really make the images pop off the page. Fluorescent neon lights and brightly coloured clothing are the order of the day here, and his almost blindingly bright colour palette only adds to the vacuous, superficial nature of the world that French has created.

If I was to level any criticism at this book, it would be at the development of main character Harrison, the man who finds himself digging into the truth behind Johnny Orion, and presumably the man who will be carrying the bulk of the narrative as this series moves forwards. There just wasn’t much of a connection formed between the reader and the character, at least not yet, and we didn’t really find out enough about him in this first issue to find ourselves caring much about him one way or another. I’m sure that will change as we progress, but for a first issue, not really caring about (presumably) the primary protagonist is a less than ideal situation.

Overall though, this is an impressively interesting set-up issue, and it’s clear that French has only begun to scratch the surface of what should be yet another gripping tale. Well worth a look, and another brilliantly executed concept from the Unthank Comics crew.

You can grab yourself a physical or digital copy of Freak Out Squares from the Unthank Comics Webstore. Also, make sure you keep the site bookmarked (as well as their Facebook Page), for more details of this and their other series’, including Gonzo Cosmic, Black Leaf and Neverending. 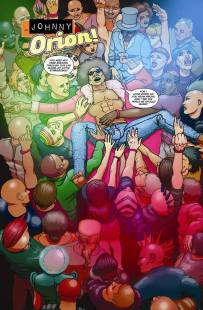 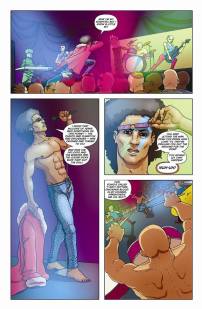