I said, didn’t I? I said I could feel this coming together? Said I would eat my hat if it didn’t? Good job too, because my hat does not look appetising at all… it’s orange for starters!

Dancing merrily through the usual compliments, Del Duca’s art still rocks, Keatinge’s dialogue is still elegantly sweary, Gieni’s colouring is exceptional, and Brisson’s lettering, particularly his onomatopeia, is ingenious – morbid though it may be, KWAQUITCH is now my favourite!

The issue as a whole is a great balance between revelatory backstory, and pressing forward on the story in the ostensible here and now. Kate’s newly introduced brother is kind of adorable, and Keatinge expertly captures the speech patterns of a cooped-up 10-year-old reacting to his newfound sister’s rage-fuelled outbursts.

But it’s the big reveal, why Kate’s so damn sad all the time, that’s really the source of it coming together, and that is something of a doozy, which I’ll not spoil here. Suffice to say, it would appear she believes that it’s self-inflicted, and it’s down to us to judge whether or not she’s justified in thinking that. I’d lean towards no, but then I suppose I would, ever the pessimistic optimist that I am. The final panels of the issue are a little heart-wrenching, that much is certainly true.

It’s been a while coming, but this series is finally getting to the crux of the matter, and it’s become clear that the first arc is laying foundations for future stories to come, with Kate’s accepted role in the adventuring being reversed going forward. The title of the piece still doesn’t make much sense – to me, at least; she’s not taken that many photos – but hey-ho, that’s a minor nit-pick at best. If you’ve not gotten on this series, now’s the time. 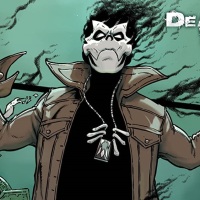