The first issue of Dark Horse’s Lady Killer introduces us to Josie Schuller, your prototypical 60’s housewife. She loves her family, takes care of her home, and – when she’s not doing that – spends her free time pursuing contracts as a government assassin. Yeah, you heard me.

The brainchild of creator Joëlle Jones, this new series gets off to a flying start here, striking the perfect balance between humour and violence, instantly drawing us into Josie’s world in the process. For the time being, Joëlle is playing her cards very close to her chest in terms of any ‘big picture’ stuff, but we do get to see Josie in action here and are introduced to her family – both personal and professional – before watching her launch headlong into her next mission.

There’s something uniquely appealing about the contrast in style that’s going on here, with the saccharine-sweet, whiter-than-white world of the early 60’s being juxtaposed with the brutal reality of the hitman (or hitwoman, in this case). Jones clearly takes great pleasure in playing around with this, having Josie switch from ice-cold – if slightly unlucky – killer to doting housewife at the turn of a page, and throwing in several great visual flourishes along the way.

Jamie S. Rich provides polish to the dialogue here, and it definitely flows smoothly throughout, from Josie’s earnest ‘Avon Lady’ routine during her opening contract to the flirtatious, innuendo-laden exchange with her handler Peck later in the issue. There’s a lot to like here, and with the cast of characters being kept relatively small, each of the key players gets their own chance to shine. This is still undoubtedly Josie Schuller’s show however, and while the chain of events that led her into this world remains unexplained, she remains an extremely engaging protagonist.

Overall, while it isn’t clear yet exactly where the rest of this five-part story is heading, this is still an impressively strong opening chapter. A brilliantly unique idea executed with a delicious visual flair, Lady Killer is a series you owe it to yourself to pick up.

If you want to find out more about LADY KILLER, check out our exclusive interview with creators Joëlle Jones and Jamie S. Rich. 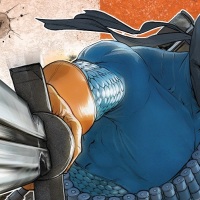