Sometimes, no words need to be said at all to tell a story. In fact, some of my favourite comics in recent years have done exactly this, and now I can add one more issue to the list. This issue is almost entirely devoid of dialogue. I say almost devoid, because honestly, the panels tell a story of a thousand words, with the countdown clock having an almost 24 kind of feel to it, but at the same time managing to progress the action in such a fluid manner..

It’s always easy to forget that characters exist in East of West, simply because at this point, there are so many characters that they can sometimes slip into the background. This time round we are greeted by a group of assassins trying to take out the wife of Death, and Mother of His child. If that doesn’t take balls, then I don’t know what does. What we’re also greeted by is an absolute masterclass from Nick Dragotta in the art of visual storytelling. With the use of dynamic panel structures, a couple of nods to Kill Bill with the use of black and red, and several unashamed splash pages, you can’t help but draw parallels to old-school martial arts films where not a word is spoken, and it’s all action all of the time.

War is not a pretty thing, nor is it fair. Hickman has fun playing with that premise within this issue. If you were to go to war with someone these days, it wouldn’t be a chaotic shoot-out, it would be assassins and smart missles. So take that into the world of EoW, and of course it’s going to be high tech assassins, arms that can snap swords, and a shipping container that could put the end of Raiders to shame.

I know that by now, I don’t need to tell you how good EoW is, because – to be honest – it does that all on it’s own.  You pick up a trade of it and are instantly immersed in a world that Tolkien would be proud of. EoW is a series that is best read in the one sitting, or at least in a sizeable chunk. The story flows in a way that sees issues compliment each other, enhancing the overall story in the process. This issue is a notable exception though, as it is dynamic, fast paced and, from start to finish, an absolute schooling in minimalist storytelling.

I can’t wait to see what happens next.

The writer of this piece was: Chris Bennett
Article Archive: And Now For Something Completely Different
You can also find Chris on Twitter. 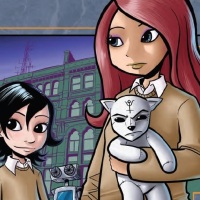