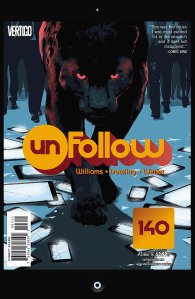 For the latest issue of Unfollow, a series which sees eccentric billionaire Laurence Farrell leaving his fortune to one hundred and forty random strangers, writer Rob Williams finally sinks in the real hook of the story. Unfortunately, it’s a hook that was already well and truly sunk – for me, at least – from the moment I read Vertigo’s first preview of the series. It’s curious that it has taken Williams so long to deliver the “oh, by the way, the less of you who are alive when I die, the bigger each individual’s share will be” twist, as I’m assuming it was a lot of people’s main reason for picking the book up in the first place, but nevertheless, the execution of the reveal is handled flawlessly.

The issue sees Farrell’s “140 characters” descending onto his tropical island, and shows off the impressive diversity of the ensemble cast. The brief, fleeting glimpses we’ve been given of some of the characters thus far starts to pay off as we begin to see them interacting with each other, and the first half of this particular issues is dedicated to the – ahem – “interaction” between Dave and Courtney as they are forced to share a private jet. The latter part of the issue sees Farrell delivering the twist in a wonderfully scripted speech, and should give the series a much-needed surge of momentum as it moves forwards.

Mike Dowling’s artwork remains solid throughout, with some truly expressive characters. The detail may be lacking in places, and there are pages where the sum of the parts are definitely greater than the parts themselves, but the overall aesthetic is commendable, particularly during the closing pages of the book where the drama and tension are ratcheted all the way up. He also continues to have an absolute blast with Dave’s unexplained feline “visions”, providing a chilling sense of foreboding that Williams enhances with his troubling inner monologue.

Overall, Unfollow is a series with an undoubtedly brilliant hook which, while it may have taken a little longer than expected to finally its full stride, finally seems poised to deliver on the potential of its premise. The basic concept offers up a lot of unique moral and societal questions, something that – given the diversity of the 140 (or should that be 139?) characters, ranging from podgy businessmen to skilled hunters – I’m expecting to be fully explored in the issues to come. Slick, tense and wonderfully scripted, Unfollow is a truly gripping series thus far, and with it surely only being a matter of time before things break down into a social media-inspired Battle Royale, you can definitely count me in for the rest of this twisted journey.