Long before the cinematic successes of Joss Whedon’s The Avengers and Age of Ultron, this arcade beat ‘em up brought the heroes and villains of Marvel’s comic pantheon together for the brawl to end them all. Originally released in arcades by Data East in 1991, the game allows players to take control of Captain America, Iron-Man, The Vision, or Hawkeye. Our heroes must do battle with a host of enemies under the control of the nefarious Red Skull, who seeks to destroy the earth using a moon-based laser weapon.

Coming a year after the NES version hit the shelves, the Megadrive iteration of the game arrived in 1992, released by Data East but developed by Opera House. The side-scrolling brawler was a particular strength of SEGA’s flagship console (it’s early popularity built on titles like Golden Axe and Streets of Rage), meaning this entry was up against some stiff competition. The game’s cast of characters, both heroic and villainous, is perhaps it’s most impressive feature. In addition to the four heroes on offer at the start of the game, Quicksilver, Wonder Man, Wasp, and Namor the Submariner appear at certain points to offer assistance. The Red Skull is of course the main bad guy, but you can expect to cross paths with Ultron, Juggernaut, and a Sentinel among others. 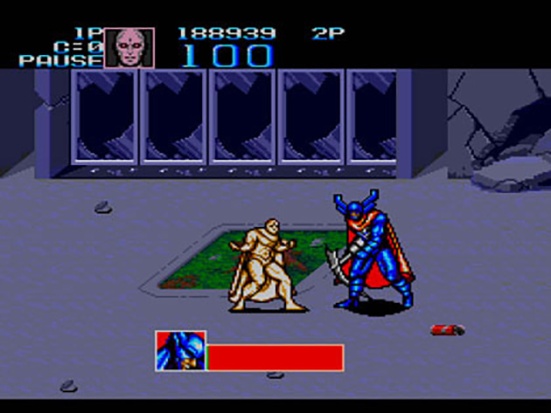 Vision takes on the Grim Reaper!

Gameplay is irritatingly problematic, mostly due to missing frames from the arcade version’s smoother animations, which makes movement linear and jerky. Each hero has their own set of jumping and special moves to bolster the rather ineffective primary attack, with the added extra that the specials do not have an energy cost. As a result, a play style based on ranged combat with jumping attacks becomes the most effective for progression, making the stock fisticuff options largely redundant.

Parts of the environment can be used as weapons, too, and there are also a number of objects lying around, such as cans, rocks, etc, which can be used to make your task a little easier. As mentioned earlier, level bosses tend to be recognisable Marvel villains, but minor ones show up midway through to drain your energy before facing the level’s guardian. The brawling is broken up with the occasional R-Type style level, with Cap and Hawkeye talking to the skies in flying machines during these sections. The movement of sprites is far smoother here, the game’s core engine being more suited to this style of action, and these moments are among the more enjoyable in the game.

The game’s graphics are certainly nothing to write home about, with small, poorly drawn sprites for the most part. Although each character is identifiable, the rough edges and thick outlines on the sprites make them look chunky. Backgrounds are repetitive and dull, but in fairness, the arcade version suffered from similar issues. Bosses are perhaps the best-rendered graphics in the game, with the massive Sentinel, Ultron and Red Skull standing out. 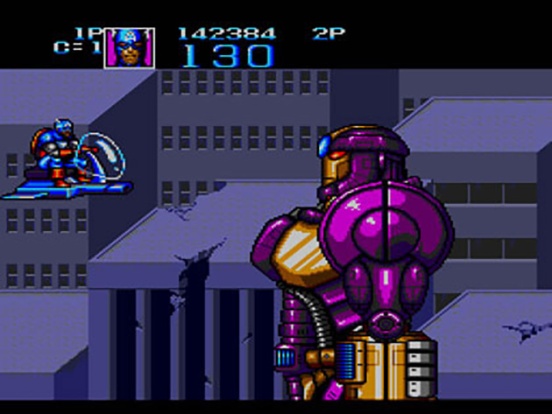 Sound is another element that falls short of the quality expected on the system. Digitised speech is muffled and hard to understand, and it’s just as well there are subtitles to accompany each verbal exchange. The soundtrack by Tatsuya Kiuchi and Shogo Sakai features a rousing heroic anthem to get things going, but the tracks tend to be a little too frantic at times, and become more annoying than memorable.

Although it won’t win any awards, Captain America and the Avengers is a decent side-scrolling brawler, which can be fun in two player mode, however it’s erratic animations, initial high difficulty, and sub-standard audio, mean it won’t stand out from a strong crowd on the Megadrive.