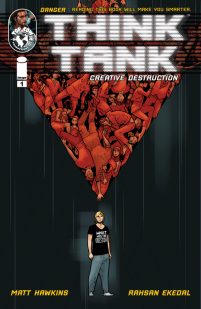 I don’t know about you lot, but when I think of Top Cow Productions, I can’t help but bring to mind the likes of Witchblade, Aphrodite IX, Fathom – you know the ones, the sci-fi/fantasy books with the questionably-armoured, curiously-proportioned ladies on the front of them. Much as we’re not to judge books by their covers – and indeed, those named above do have fascinating stories contained within them – it can be a little difficult to glide past such prejudices. So the fact that Think Tank has not, as far as I can see, had anything other than a slightly nerdy dude on each issues cover is… Well, it’s helpful, and we’ll leave it at that.

As a series, Think Tank has been ongoing (on and off) since 2012 – and whilst of course any familiarity with a back story is always going to assist in your reading of a series, as far as a jumping-on point goes, Hawkins does a stellar job of opening the series up for new-comers here. The first few pages get you up to speed neatly and succinctly, with Ekedal’s starkly striking greyscale artwork linking itself back to the book’s first series from 2012, before exploding into a gorgeously coloured nightscape to set the scene of this new story. It’s nicely symbolic of the series rising out of the radio-silence we’ve had since the last entry was put out nearly two years back.

The script is solid, setting up a nicely contemporary tale of rogue super-weapons, with just enough of a dash of sci-fi to keep things on an intriguing ‘what if ’level, rather than the paranoia of a ‘this is probably happening RIGHT IN YOUR BACK GARDEN’ situation. Though given that a lot of the military tech being presented herein is frighteningly close to a reality, there is a little of the paranoia thrown in too. There are a couple of odd hiccups in what’s otherwise sharp dialogue, though some of the background characters voices do blend together a little, forcing you to keep a sharp eye on who the speech bubbles are coming from. Still, it’s an enjoyable enough read that you can forgive such minor shortcomings.

The art is rather striking – Ekedal’s style has been refined to a knife-edge over the two-year series hiatus, and the full colour-work is a step-up from the greyscale of old, breathing life into the characters, and giving the story’s world a sense of immediacy that the old stuff lacked.

It’s a enjoyable read, certainly, but at the moment, lacks anything stand-out to send it into essential territory. The characters decorating the story remain intriguing – if occasionally a little too oddball nerdy – and the mostly sharp dialogue brings it all together. There’s potential for greater things, and if Hawkins and Ekedal can escalate matters as the final page hints that they can, you can expect an uptick. But as it stands…