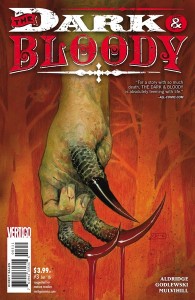 After a relatively restrained first couple of issues featuring a lurking sense of unease punctuated by bouts of frenzied horror, Vertigo’s THE DARK AND BLOODY finally yanks back the veil and gives us a long, unblinking look at what we’re really dealing with. And boy is it effective.

While the events of the present day have played out in unsettling detail, the apparent source of all this horror – the actions of Iris and his regiment in Iraq – have been left largely to the reader’s imagination. Hints have been dropped and allusions have been made, but in this issue, we are finally given an harsh, unforgiving look at exactly what happened all those years ago. as well as the ripples these actions have caused in the here and now.

Iris Gentry is a truly fascinating lead in this twisted tale; a deeply flawed, deeply damaged man struggling to make ends meet and provide the best life he can for his wife and son. Unfortunately, the demons of his past seem to have finally caught up with him, and his lonely desperation as he struggles to find someone to believe his words is really pushed to the fore here. Writer Shawn Alrdridge has delivered a master class in characterisaton here; Iris isn’t a hero, nor is he a villain. He’s just a man desperately trying to do the right thing and somehow live with the horrors he has unleashed.

This issue also serves as a significant payoff to Aldridge’s measured pace, letting his characters come together gradually over the first two issues before finally slotting in the final puzzle piece with a resounding jolt. We get to find out a little more about Ayah, the mysterious girl who Iris’s son Shiloh has been playing with in the woods, and once again, Aldridge delivers the delicious reveal with a supreme flourish.

Artist Scott Godlweski’s work remains clean and controlled, but this doesn’t diminish the impact of what we’re witnessing. Whether it’s the slightly supernatural horror moments or the (for me, far more unsettling) natural horror of Iris and his regiment’s actions, Godlweski does a fantastic job of providing moments that resonate both emotionally and visually, forcing us to watch with mouths open wondering just what the hell we’re looking at.

This is undoubtedly the strongest issue of the series so far, and serves as a true testament to the creative synergy of both writer and artist. Everything is measured, everything is controlled, but that only makes the unfolding horror all the more unsettling as events play out with an almost morbid certainty. Will Iris survive the demons of his past as they come looking for him? Does he even deserve to? Simply put, THE DARK AND THE BLOODY is one of the most utterly compelling horror titles on the shelves today, and deserves to be seen by as many wide, terrified eyes as possible.