Kevin Smith is a director known mostly for his films such as Clerks and Mallrats, but he has also written for comics, directed and written for TV shows, and has been podcasting for the past 10 years. Happy to just sit and chat to anyone about everything, he is undoubtedly one of the nicest guys you’ll come across in Hollywood. Over in Scotland to promote his films Yoga Hosers and Holidays at the Edinburgh International Film Festival, our writer Louise was lucky enough to be part of a press interview with Kevin Smith and his daughter Harley Quinn Smith, one of the stars of Yoga Hosers

When Kevin was asked about how he felt the direction he had gone down with Yoga Hosers compared to his older films, he had this to say:

‘These movies are a little different to my earlier, what I’d call “better” movies, but these are the movies where I’m trying to please myself. Clerks started my career, and when it was picked up by places like Miramax, it went from ‘I just want to get this movie seen’ to ‘don’t make anything until they pay you’. The notion of pod-casting helped re-introduce the joy of creation for the sake of creation to me.

I stepped away from film-making for three years. When some-one gives you money to make pretend, it’s like getting addicted to heroin, you think nothing is better than this. One day the heroin dries up and you can’t do that anymore. After Red State I stepped away for three years. I did pod-casting, toured, did TV shows. I learnt how to pay for my family doing other things. Film making got me to where I am today, but when a film comes out you put it to work like a prostitute, and I always found that weird. I figured out a different way to do that, just to talk about the movies I’ve made to pay my bills. It made me realise that I didn’t have to worry about what would be popular, what would sell. When I started worrying about that in my career, for example with Jersey Girls, it’s an example of where I’d gone ‘what works in the world’. Making pretend and having fun like it started in the beginning just disappears. You then have two options, make it low budget or force yourself to do it for fun again. I felt I should save films for what really mattered to me. 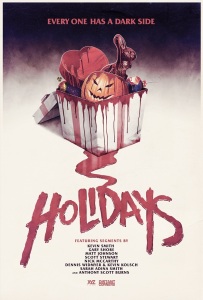 Slackers was a big inspiration to me. It changed my life. It made me realise that I could make a film too, and it started me on my journey. Now years later, I like films that I want to make. I’m a self-expresser. I got a little lost in a middle, but I like to produce as much content as I can. There are two paths in the world, creation and destruction. There’s a lot of people on the destruction path, but not many on the creative path because it’s hard. I like to create something from scratch. For a while it was about the money, but now it’s not. I keep my budgets low. Yoga Hosers was a $4million movie, and made with the same spirit Tusk was made. When Tusk was made, the guy that financed the movie, just wanted to see if I could do it. He thought it was stupid, but thought it could be amazing if we got it right. Clerks and Yoga Hosers are completely different movies, but the spirit that made the movies is the same.

Clerks, Mallrats and Chasing Amy were all about my own life, now the movies I make are films that I make up. I can make films similar to what I grew up loving. I now make films for me.’

Kevin continued by explaining how he deals with all the critics of his films:

‘People that used to hate my films now love them. For 22 years people have been trying to tell me how bad I am at my job, which is ironic. If you’re bad at a job, you’re out in a year, not 22. My audience is large enough now that I can go about my business. We expect critics, and after multiple bad reviews you do doubt yourself, but a voice says ‘you wanted this, you went out and found the money to make it’. I say to myself what was the alternative? Not to make the thing? The notion of not doing the thing I’m capable of doing because someone will say to me that I suck, there’s not contest there. At the end of the day, I make the movie for me not anybody else. I can’t guarantee that any of you will like a movie, but even a Marvel movie doesn’t know how an audience will behave. The only thing you can guarantee is how you feel about the art, because you have to carry it. I love my films like children. Do you know how many times I’ve failed in this business, but I’m still here because there is no such thing as failure? Failure is just success training. You learn from experience. I’d take failure 1000 times over not doing something because I was too scared. Now I’m in the same place as where I began.’

Kevin then explained how, although he has made things for himself, he has also written things for others, such as the comics, and directing a recent episode of The Flash:

‘That’s also for me. When I first got into the business, I used film to get into comics because I loved comic books and wanted to write them, but I didn’t think I could ever just get a job writing a comic. Most of the best comic book writers were British, which I’m not, so film seemed easier to get in to. Once I’d gotten into film I pulled aside the editor for Green Arrow at the time, and the book had fallen out of the top 100. I said if you let me write it, I can put it back in the top 20. If you see it, you can do it. People like Jeph Loeb had come from movies before comics. I said I can bring them an audience from my movies to the comics. People like Jeph Loeb and Sam Ham were the inspiration for people to go from movies to comics.

Yoga Hosers is as close as I will come to making a comic book movie. I’ve directed an episode of the Flash, and I’ve talked about this stuff for 20 years, but I have no interest in that. I liked doing the TV show, because you just have to tell the present story you’re working on and that’s it. You don’t have to tell the 3 arc structure of a movie. I think I fit well into that world because it’s all about character development. Each script has heart, humour and spectacle. Heart and humour is my thing, but spectacle is not. In movies spectacle is above heart and humour. Marvel manages to blend the three very well, but is spectacle that will make you leave the house.

With TV shows you’re already there in the house, and all they have to do is get you to watch that channel. They do that by every week making you want to see what that character is up to and the relationships they are building with people. We tune in because it’s a soap opera, but in movies no-one wants to see a soap opera, they want to see things blowing up and giant robots in the sky. I can’t give people visual images like that, but I can give them the scenes.

Kevin then went on to talk a little bit more about the writing he’d done in comics and how it differs from making the films he’s made:

‘With comics, I didn’t create the characters, but that’s when the fan-boy muscle kicks in. You can write a better version of yourself when you’re writing comic books. I write as a fan. My favourite writers, such as Grant Morrison, take on characters that I love and present them in a way that makes me want to write them too. I lean on those that have gone before and see what they have done. I am at my least creative when I’m writing comic books because there are certain rules you have to play with. With a comic book, an artist can put it all together for you. On Daredevil, Joe Quesada had to render what I asked for. In the comic book world, I write and someone else directs.’

Before the end of the interview, the questions were aimed at Kevin’s daughter Harley. She explained what it was like growing up as his daughter, her passions and how it felt to be directed by her Dad:

‘He takes the opportunity to teach me a lesson. I don’t get grounded, but I’m taught life lessons.  My passions are working with animals, volunteering at animal shelters, but besides that I love to write, act and take pictures.

He always directs me in real life too but it’s awesome working and connecting with your parents. A lot of my friends don’t have strong relationships with their parents. On top of having a strong relationship, I get to work with them which gives me an even stronger understanding of them.’ 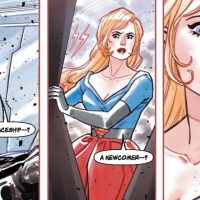 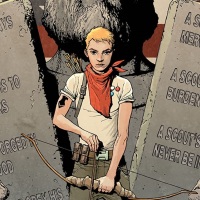