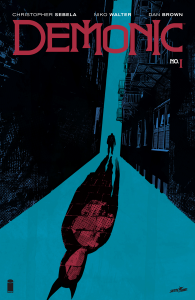 How far would you go to protect your family? That’s the question Detective Scott Graves is forced to ask himself in Demonic, a brand new series co-created by Robert Kirkman and Marc Silvestri. Graves is a man whose life seems to be built on secrets, lies and the ongoing struggle to escape his mysterious past. But when a seemingly run-of-the-mill domestic disturbance inadvertently tears open some old wounds, he’s forced to face up to his inner demons and make a decision that could ultimately prove to be a matter of life and death for his wife and daughter.

If it sounds like I’m being needlessly vague, then you’re exactly right, because this is a series that needs to be experienced gradually, peeling away the layers of Scott Graves’ life piece by piece. It’s a dense, panel and dialogue-heavy issue, but writer Christopher Sebela’s typically impressive script keeps things flowing smoothly throughout, introducing us to Graves slowly and dangling tantalising chunks of storyline bait just out of reach throughout the course of this opening chapter.

Newcomer Niko Walter’s artwork is solid for the most part, conveying the sense of tension admirably and doing an impressive job with the more supernatural aspects of the story. While his work is fairly restrained, he is given a couple of opportunities to really cut loose during the latter stages of the issue, opportunities he seizes with gusto, giving the shocking storyline beats the emphasis they truly deserve. Walter is assisted by colourist Dan Brown who adds a moody, washed-out quality to the pages and letterer Sal Cipriano, who deserves additional credit here for keeping the pages clear and uncluttered, even in spite of the hefty amount of dialogue.

Almost inevitably, there’s a sense of “what would you do if you were in this situation?” to Scott Graves’ dilemma, and while the answer may initially seem to be an easy one, the further we delve into his story, the harder that decision seems to be. There are mysteries here that beg to be solved, and the final page throws a shocking spanner into the works, leaving Graves with a substantial moral and practical problem to overcome.

While it’s ostensibly a series about demons, Demonic actually digs a lot deeper into the helpless feeling of surrendering your own free will and then having to live with the terrifying consequences of your actions. Chilling, unsettling and utterly compelling, Demonic is a story that will keep whispering in your ear long after you’ve put the book down. Highly, highly recommended.