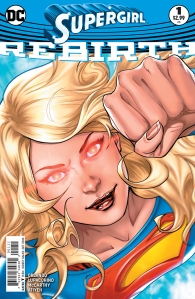 Supergirl is a character who, if I’m honest, I am not very familiar with. Sure, I know she’s Superman’s older cousin Kara Zor-El and that, due to her space capsule taking the scenic route to Earth, she arrives many years after Kal El, arriving not as a baby but as a teenage woman.  However, beyond the books Superman/Batman: Supergirl and Supergirl: Power, both from the amazing pen of Jeph Loeb, my knowledge of this character is limited to say the least. I am also aware that she is currently one of the jewels in The CW;s crown of DC television shows, but as of yet I have not taken in any of the episodes. Therefore in this review I am looking upon this character with essentially virgin eyes.

This story begins with the Department of Extra Normal Operations about to fire a powerless Supergirl into the sun in a last ditch attempt to reignite her powers and hopefully fill the void that has been left by the death of her cousin Superman (I am assuming at this point that this story takes place before the events in the recent Superman and Action Comics rebirth story). Just as she is sent hurtling towards the sun, a rift in the Phantom Zone caused by the shuttle’s take off spits out what can best be described as a Kryptonian Werewolf. Can Kara regain her powers and save her friends and family at the DEO?

Taking on the writing duties of this new venture is Steve Orlando, fresh from his groundbreaking and critically acclaimed stint on Midnighter, the first openly gay male character in the DCU. He tackles the concept of this story well, however, I did find the writing a little stereotypical. There is little in the way of surprises from the supporting cast, from the “All-American hero” agents to the cynical boss of the DEO to the alien ‘monster’ filled with rage because he is misunderstood. That said, the lead character is written with an almost schizophrenic energy to her as she switches between ethical hero and flippant teenager, this kind of approach definitely works well for a character trying to discover herself.

The art of Emanuela Lupacchino is, for me, the best thing about his book. Recently the controversy caused by the Frank Cho covers has perhaps changed the way we look at female heroes, but in Lupacchino this series has an artist who is drawing a heroine steeped in power and strength while never compromising her femininity. I am impressed with depth she gives the lead character while at the same time drawing the supporting cast almost out of focus to help give the foreground pride of place in the panel. In fact, next to Jim Lee she is fast becoming one of my favourite artists.

While this is a book that lacks the certain ‘wow’ factor that I found in the Superman Rebirth stories, this is still a solid enough start, and there’s more than enough potential here for me to make me think that it could be one worth keeping an eye on as it progresses.

The writer of this piece was: John Patterson
John Tweets from @jpeg37