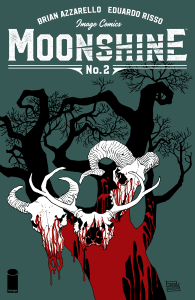 The first issue of Moonshine from Image Comics introduced us to Lou Pirlo, a mid-level gangster who finds himself travelling to West Virginia on behalf of his boss to try and broker a deal with the reclusive Holt, whose illegally brewed hooch has caused quite a stir on the streets of New York City.  Unfortunately, Pirlo ended up caught between a rock and a hard place – or a belligerent, uncooperative hillbilly and a borderline psychotic mob boss – and decided to turn to his favoured pastime, drinking, at the conclusion of the previous issue.

Azzarello’s dialogue is truly authentic throughout, if a little full-on at times, and immerses the reader in the distinctive setting and time period of the story.  From the first issue, it was clear that something was a little bit ‘off’ about these reclusive hillbillies, and about midway through this issue that ‘something’ is revealed in dramatic fashion, giving a whole new meaning to the title of the series that – having come in completely blind without reading any solicitations or background info – I’m kicking myself for not identifying sooner.

It’s also impressive that Azzarello has made almost zero attempt to make Pirlo even remotely likeable, with his sleazy attempts to hit on the local women and his gruff, sarcastic demeanour making him the furthest thing from a textbook “leading man” that you could imagine.  This doesn’t impact the story in the slightest however, and we still find ourselves dragged along with him for the ride as events rapidly spiral out of control in this latest issue.  It also feels like we’re right there alongside this grade-A douchebag as the aforementioned reveal takes place, with our jaws on the floor right next to his.

Risso’s heavily inked artwork provides a dark, stylised aesthetic as the story unfolds, and his slick, cinematic layouts ensure that Azzarello’s narrative flows smoothly.  He also does an impressive job with the reveal (okay, okay, there’s no point beating around the bush any more, the freakin’ werewolf!), adding a surprisingly grounded supernatural slant to this hillbilly and gangster-heavy story.

With Moonshine finally tipping its hand, it’s going to be really interesting to see where Azzarello takes the story from here.  The pieces – as damaged and unlikeable as they ultimately are – have all been placed on the board, and now it’s time to see how this bizarre and intriguing situation unfolds.  One thing’s for sure, though, with sharp characterization, an authentically grounded feel and a wonderfully executed horror twist, Moonshine is a title that flat-out demands your attention.