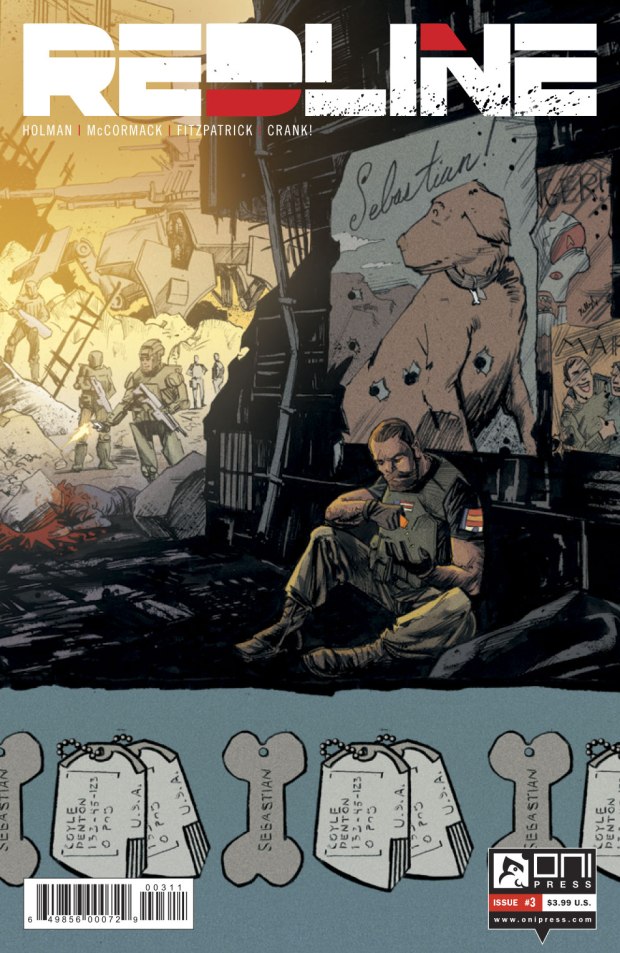 Suicide bombings, dead aliens, mysterious alien necklaces – Superintendent Denton Coyle is still struggling to piece together the recent outbreak of chaos on Mars, and with Corporate breathing down his neck every step of the way, it looks like he’s going to have to either give up entirely or do something incredibly dangerous if he wants to get any kind of results.

Guess which one he chooses?

Once again, Neal Holman’s dialogue proves to be among the best on the shelves today, with a natural, free-flowing style and a brilliant grasp of comedy in all its forms.  Whether it’s the dry, offhand barbs from Denton or the slapstick stylings of Simon, this book is guaranteed to keep the smiles coming throughout, even though the overarching story is actually a fairly serious military drama.

It’s this contrast that really makes Redline work as a series.  It isn’t a “comedy” in the usual sense, with laboured set-ups and punchlines and all that jazz, but instead feels like a bunch of real people saying and doing real things – things that just so happen to be incredibly funny – in the middle of a pretty grim situation.

It also doesn’t hurt that the characters are fantastic.  Yes, Denton is still more hangover than man and yes, Peck is still a dick, but it’s Simon who really shines here, stealing the entire issue with a couple of genuinely hilarious scenes.  In fact, his profanity-laden rant at Peck and failed attempt to open a magnetically sealed door may very well be worth the cover price by themselves.  Seriously.

Clayton McCormack and Kelly Fitzpatrick continue enhance the mood of the series with their grimy aesthetic, making this book feel a lot more like a gritty military drama than a quote-unquote “science fiction” story.  Cormack also continues to prove to be utterly invaluable in helping Holman’s humorous moments to land, nailing the beats perfectly with the expressions and posture of his characters.  One particular moment – the aforementioned ‘magnetically sealed door’ gag – is made even funnier by virtue of Denton’s bemused, deadpan reaction to what’s happening, and it’s in these moments where Redline really shines.

This is a slightly slower paced issue than the first two, with a lot of exposition delivered through enjoyable dialogue exchanges, as well as a gradual unveiling of the overarching mystery.  Thankfully, this isn’t a book that has ever relied on spectacle or action, and the prospect of watching these profanity-laden exchanges and moments of inadvertent comedy unfold is always a welcome one.

Redline remains one of the best books on the shelves right now by virtue of its humour, its drama, and the balance it strikes between the two.  Holman, McCormack and Fitzpatrick are working together as one hilarious and gloriously profane unit here, and I absolutely cannot wait to see what happens next.

If you want to find out more about REDLINE, make sure to check out our interview with Neal Holman, Clayton McCormack and Kelly Fitzpatrick by CLICKING HERE.