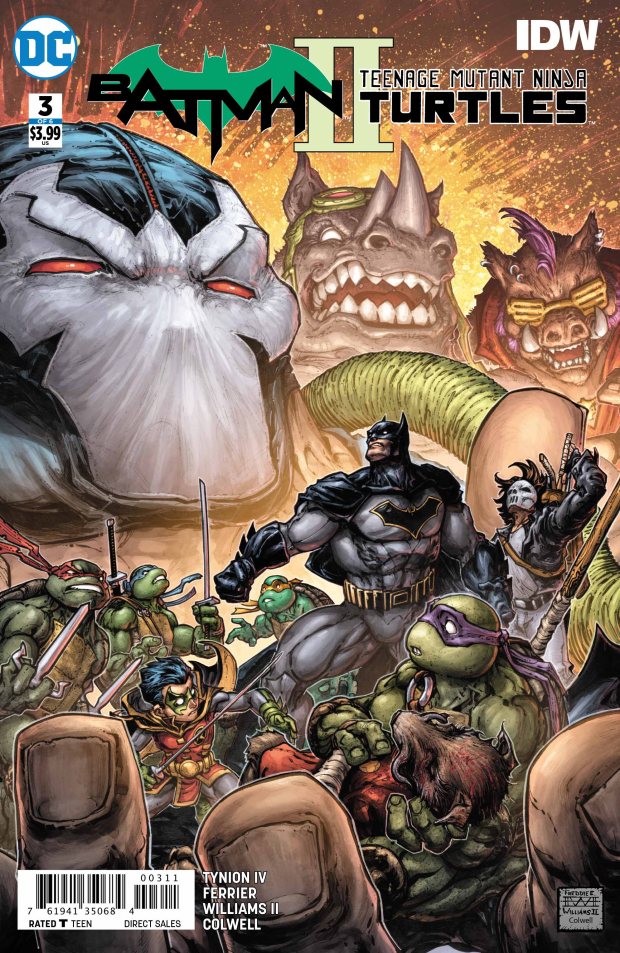 On paper, these inter-universe crossovers often seem like can’t-miss prospects.  Batman teaming up with the Turtles?  Easy money, right?  But in reality, these things are actually a lot trickier than they initially appear, as the plethora of underwhelming, muddled and unsatisfying crossovers that are filling bargain bins in comic shops all across the world will readily attest to.

Thankfully, the second instalment of DC’s Batman/TMNT crossover is in the safe hands of James Tynion IV and Freddie Williams II, meaning that what we’ve been treated to so far is nothing less than a fun, in-your-face slice of unpretentious comic goodness.

The idea of having Bane transported to the world of the TMNT due to an accident on Donatello’s part, only to immediately lay waste to the city of New York, taking over the Foot Clan in the process, is sheer brilliance.  It’s the kind of high-concept fun that frequently goes hand-in-hand with crossovers like this, but in the hands of its two creators, it feels a lot more fresh and exciting than it perhaps has any right to.

In an interesting move, Ryan Ferrier takes over scriptwriting duties for Tynion IV here, providing authentic sounding voices and some great verbal exchanges. The way Damian interacts with the Turtles, for instance, is pure gold, as is Bane’s typically overwrought monologue midway through the issue.

Freddie Williams II is one of the most gloriously un-subtle artists I can think of, and his smash-mouth style works perfectly in bringing a story like this to life.  His characters are well known for being hulking and shredded, and as a result, Bane feels like the villain he was pretty much put on this Earth to draw.  The skirmish between Raphael and Damian is fantastic, and while it does feel at times like the story is just a series of interludes between jaw-dropping Williams splash pages, I can certainly think of worse reasons for picking a comic up.

The final pages here set the stage for what should be a titanic smackdown in issue four, providing all kinds of opportunities for Williams II to flex his creative muscle and do what he does best, and that fact alone is more than enough to convince me to shell out (no pun intended) for the next chapter of this series.

If the idea of Bane leading the Foot Clan, Bebop and Rocksteady into battle against Batman, Damian and the Teenage Mutant Ninja Turtles doesn’t fill you with giddy excitement, then you might want to check your pulse.  This is loud, bombastic fan service of the highest order, and I absolutely love it.