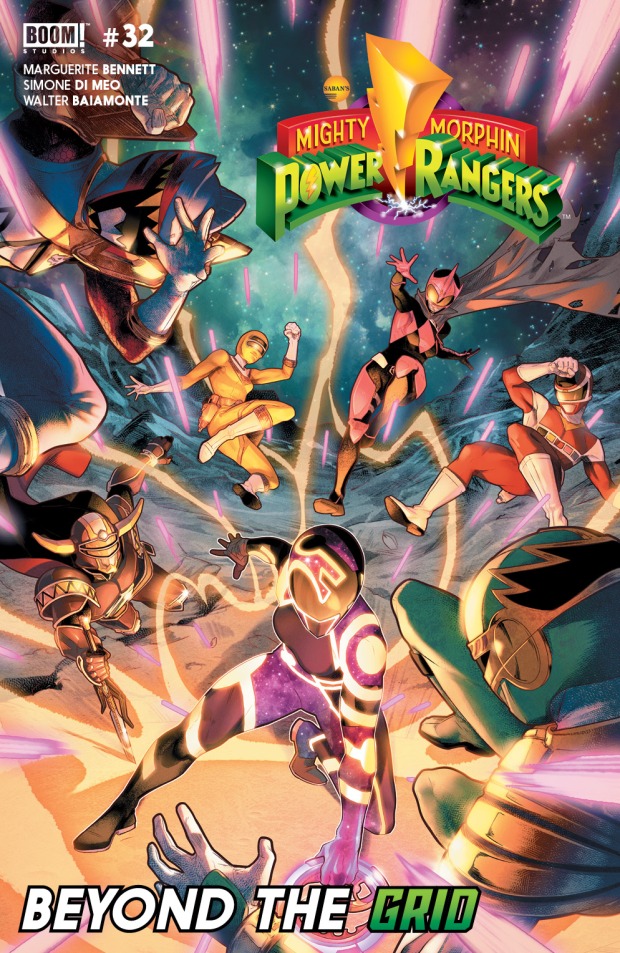 Ambush! Six Rangers from across space and time have been spat out into a far-out corner of the universe. But with little power and threats on every side, can our team work together? And even if they do, who is this new Power Ranger and does she spell doom for our new heroes?

It’s really hard to be original after 25 years. Take a look at any long running series or show and you’ll quickly realise that coming up with genuinely unique ideas eventually becomes rather difficult. And yet, amazingly, after a tremendous event comic, Power Rangers has done something unique again. Namely, trap seven or eight main characters in a hopeless situation and let the story and drama evolve naturally.

The best thing about this book is the fact that Marguerite Bennett has crafted a brilliant, character-focused story. Every Ranger has their own unique motivation and character traits. Mike (The Magna Defender) especially has a really unique relationship as without his brother Leo (Red Lost Galaxy Ranger), and has become someone who will recklessly put his life on the line, which actually creates an endearing budding relationship with Tanya (Yellow Zeo Ranger). This, combined with other standout character moments like Andros (Red Space Ranger) just wanting to keep his sister safe, or Heckyl (The Dark Ranger) and his mysterious nature. Character is key here, and that’s precisely why this story works so well.

While Bennett works hard to give this issue a great tone, what really helps it come alive is the superb artwork by Simone Di Meo and Walter Baiamonte. Di Meo’s Rangers all look battered and bruised after Shattered Grid and the art here really sells how desperate the situation is, with every Ranger looking like they’ve barely got any fight left. Everything feels unstable too, and from the Ranger’s situation to their powers to the odd ‘stutter’ effect some the Rangers have while morphed, it really helps to sell the fact that they’re utterly exhausted.

Colour also plays a significant role in this issue. The bright colours of our Rangers contrasts brilliantly with this new dark, muted world that this makeshift team finds itself in. They genuinely feel like they don’t belong, and that uneasiness is felt through the whole book due to Baiamonte’s sterling efforts.