Grant Morrison is back!

The man widely considered to have written some of the best Superman, Batman and JLA runs of all time has finally returned to DC Comics. After a lengthy absence from the big two, Morrison has returned and this time he’s going into space. So strap in kids, because Hal Jordan and the entire Green Lantern mythos is going on one hell of a cosmic ride.

The Green Lantern Corps. Emerald defenders of the 3,600 sectors of the known universe. Many races from many worlds with one quality that unites them – the ability to overcome great fear. Of the many Green Lanterns there is one who stands above all others. His name is Hal Jordan and he’s stuck on Earth. With his battery in for repair and upgrade, Hal is just trying to get by, but when a fellow member of the Corps crashes on Earth and with information about a conspiracy that threatens everything, it’s time for Hal to say the oath and get back on active duty.

If you’ve read anything by Morrison, you know the quality to be expected and it’s clear that hasn’t lost any of his edge here at all. The dialogue dances from realistic and mundane to poetic and thought-provoking. If this is Grant Morrison’s version of a police procedural, then it’s wonderful. Hal feels more human than he has since Geoff Johns, and comes across as perfectly relatable here. Grant is doing what he does best here, taking pieces of continuity from across the history of DC and building it into something truly unique. Don’t get me wrong, everything here is completely insane, but it works in a way that only Grant Morrison books do.

Helping Grant out are the phenomenal duo of Liam Sharp on art and Steve Oliff on colours, and the pairing combine to bring so much to this book. Sharp draws the universe with a wonder few others can, and from the vastness of space to the wavelengths of existence (It’s a Grant Morrison book, just accept it’s going get really weird, folks) his art look truly great here.

Practically every panel is one I want frame because Sharp’s art is an absolute gift, but honestly, Oliff’s colours are beyond breathtaking here. Every panel is filled with colour, with the Lantern’s light providing a truly spectacular contrast to the Earth that Hal has been trapped on. The universe feels freed to Hal Jordan, and by extension the audience. And with this pairing covering the visual side of this book, they have the potential to become easily one of the greatest Green Lantern art teams of all time.

Look, if you knew this book was coming then you already have it. But for those who somehow still are wary then please take my advice and just go for it. Grant Morrison has returned with all of his masterful knowledge and skill in this particular medium, which combined with peerless art and colours from Liam Sharp and Steve Oliff make this an absolute must-read. Get it, read it and prepare for a Green Lantern run that we’ll all be talking about for a long, long time to come. 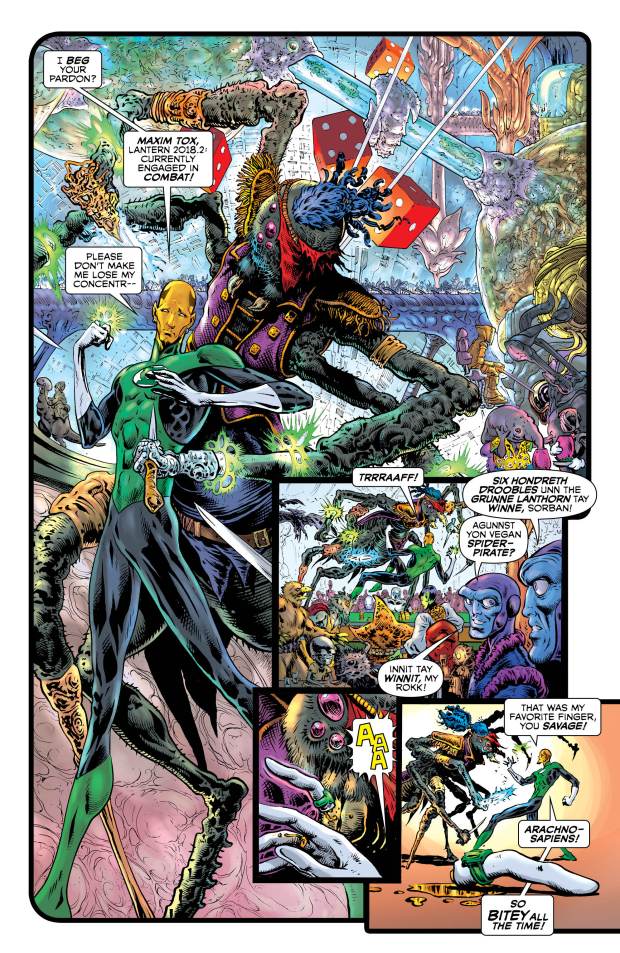