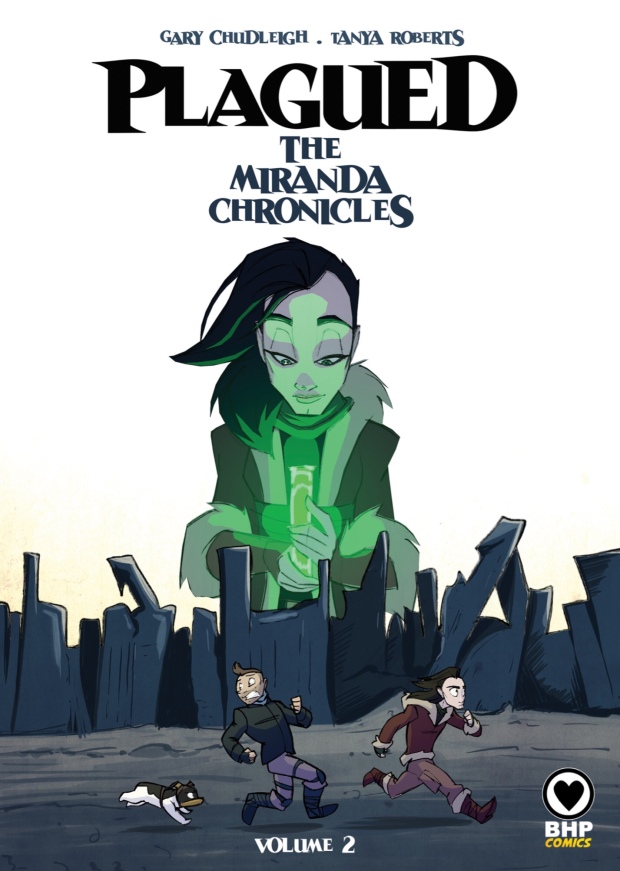 The first volume of Plagued: The Miranda Chronicles from BHP Comics introduced us to Thomas Mackie, a witch-hunter living in a future world where a deadly plague has wiped out the majority of the world’s inhabitants.  Mackie, along with his dog Dex, was tasked with tracking down and apprehending the witches that have been deemed responsible for the outbreak.  However, a chance encounter with a witch named Miranda helped him realise that the truth behind the plague was something more sinister than he could have possibly imagined.

The first arc of the series, from the Scottish pairing of Gary Chudleigh and Tanya Roberts, went down an absolute storm, snatching two SICBA Awards back in 2015 (Best Comic and Best Artist, for those keeping score at home), and readers have been clamouring for a follow-up ever since.  And now, in 2018, we’re ready to check in with Mackie, Dex and Miranda again as they find themselves on the run, living the life of outlaws and trying to get the real cure for the plague (as opposed the highly expensive government-produced alternative) into the hands of the world’s population.

While the first volume felt very much like an emphatic mission statement, with Chudleigh and Roberts setting out their stall and establishing this quirky, post-apocalyptic version of Scotland, this feels very much like a gradual expansion of that world. Storylines are pushed forwards, characters are developed and new mysteries are introduced as our plucky heroes find themselves squarely in the crosshairs of a brand new witch-hunter. 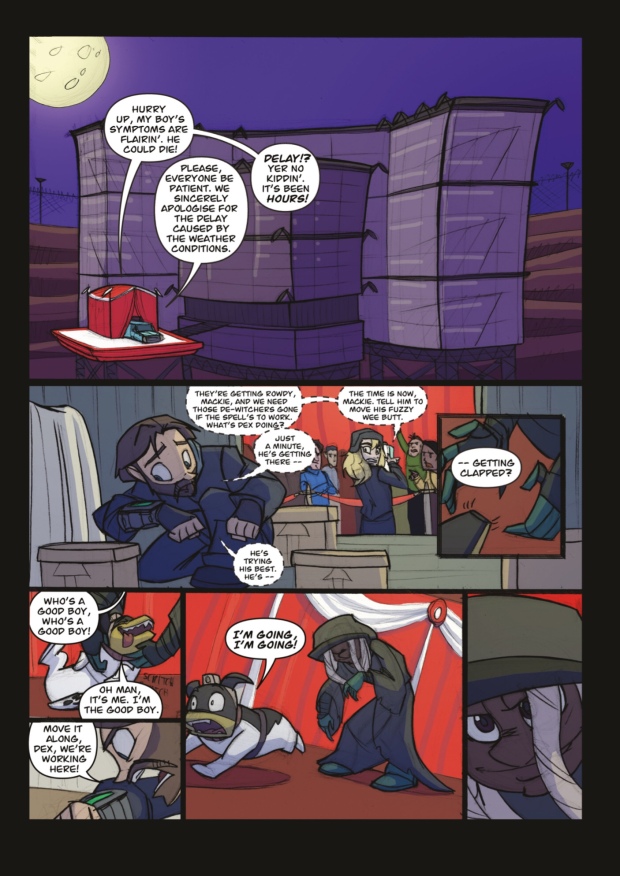 It’s a really fun read from start to finish, with Chudleigh’s childish sense of humour and Roberts’ wonderfully cartoony artwork keeping the pages turning throughout. And while the whole ‘post-apocalyptic world where the population is dying of the plague and the government are withholding the cure’ set-up doesn’t necessarily feel like one which lends itself to an all-ages comic, it’s a real testament to the skill and enthusiasm of the two creators that this series works as well as it does.

Sure, this second volume perhaps isn’t quite as tightly structured as the first, and feels a lot more like a transitional chapter to help move the overall story along, but it still manages to pack in the same amount of light-hearted humour and genuinely intriguing post-apocalyptic fun.  Roberts’ artwork is great as always, with some lively, expressive character design and a style that frequently eschews detail in favour of a fluid narrative flow.

The new villain of this chapter is interesting enough, although Mackie and Miranda’s apparent familiarity with them left me thinking I’d missed something in the first volume. Witch-hunter Salem also returns this time around, although he’s given his own branching storyline here as he decides to do a little of his own investigations into the alleged cure for the plague, assisted by a couple of bumbling minions he calls “beaks”, a pairing who get to deliver the bulk of Chudleigh’s cheesy gags.  It’s a fun dynamic and it goes a long way towards expanding the world to more than just Mackie, Miranda and Dex.

At the end of the day, Plagued is a fun, upbeat all-ages title I have absolutely no problem recommending, particularly if you have a younger comic reader in your life.  Let’s hope we get volume three sooner rather than later, because I really can’t wait to see what happens next.

You can grab yourself a copy of both volumes of Plagued: The Miranda Chronicles from the BHP Comics Online Store (CLICK HERE).