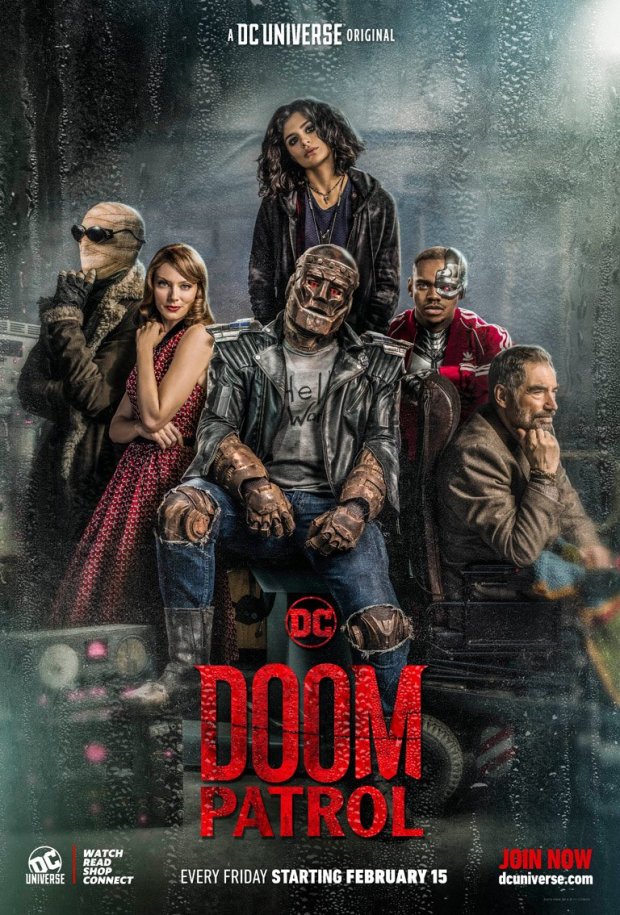 Once considered an impossibility or little more than pipe-dream, last year’s Titans proved that not only can the zany, unorthodox cast of Doom Patrol be done exceptionally well on-screen, but that they can also find themselves attracting a loving audience eager for more.

Launching on DC Universe this past Friday, Doom Patrol’s pilot episode carries the torch lit by Titans.  Not only that, but it goes further, proving that the staying power and emotional core of DC’s strangest and most out-there characters is based in just how human and relatable their individual stories are.

The pilot opens boldly, handing the reigns to Alan Tudyk’s character, Mr. Nobody, to narrate the opening with a decadently smarmy charm.  It pokes fun at its own genre, setting the tone and atmosphere for the unconventional story about to unfold, and gives us a brief glimpse at one of the series’ most delightful villains.  It also helps provide an immediate sense of relief that these characters are clearly in the right hands, as well as serving as a strong introduction for those viewers encountering the Doom Patrol for the first time.

From there, the real meat of the episode is given to establishing the tragic history, and coming together, of our incredible line-up.  We move from Brendan Fraser’s Cliff Steele to Matt Bomer’s Larry Trainor and April Bowlby’s Rita Farr in the first half, exploring the falls which see them as ordinary people torn down by their pride, hubris or self-destruction and turned into monstrous and damaged figures before being placed in the hands of The Chief to save them from the cruelty of the outside world.

Cliff gets the most screen-time, telling his story of a man at the height of his sports career who falls victim to the vices of success and his lack of control, destroying his marriage without a care and moving on to the next hit of whatever he can find. This is a man who only realizes too late what he’s doing, losing it all when he becomes nothing but brain after a near-fatal car accident.  We see his recovery as he tries to control his new robot body in the care of the Chief, Rita and Larry, as well as the powerful sobriety he’s forced to face.

On a personal level, it’s fantastic to see Fraser back in action, and alongside Riley Shanahan in the Robotman suit, they manage to perfectly carry every layer of Cliff’s character. The charm, the cynical sense of humor, the anger, the weakness, the self-pity and the hope; all while spending half of his screen time being locked in a clunking metal body.

Larry is the all American Hero; an air force pilot with a loving family, who loses that too when a test flight outside Earth’s atmosphere brings him in contact with a powerful Negative Energy that keeps him alive despite being almost burnt alive.  From here, we see that his own self-hatred began long before the accident, dealing with a love considered taboo and immoral in the ’60s. And thus, the power of Larry’s story is one of a man who has never felt like he fit in, both before and after his fatal flight.

While he doesn’t get the screen time Cliff does, his most powerful scenes are the quiet, self-reflective ones as his deep internalized struggle for a place to belong holds him so strongly from ever truly moving on.  Bomer, along with Matthew Zuk behind the bandages, work well to emphasise the combative relationship between idolized American hero and broken, lost man.

Rita’s story is one of karma cutting her down. A big time ’50s actor whose treatment of those considered less than her white idealized version of perfection ends up cutting her down when she almost drowns on-set and is infected by something in the water than turns her into a monstrous blob.  Being neither a hunk of steel, or covered in bandages, Bowlby’s physical performance is where Rita’s strength of character comes from, and she brilliantly carries the mannerisms and language of a woman who clearly never left the ’50s.

About midway through episode we are introduced to the fourth member of the group in the form of Diane Guerrero’s Kay Challis, AKA Crazy Jane.  Her history is shrouded in a lot more mystery than her compatriots, and all audience are told is that she has 64 unique split identities, and that each has its own superpower.

She steals the spotlight in a big way, and is being heralded as the biggest hit of the episode (and rightfully so), with her incredibly dynamic acting. Able to convey the sudden change between each personality, she moves from violent, to empathetic, to wounded, to rebellious with consummate ease, and plays so well off each other member of the Doom Patrol, making her immediately such a pronounced addition to their cast of outcasts.

And while I could go on and on about this fantastic cast of actors and characters, this pilot works most notably in the way Winter and Carver handle the delicate themes and issues being played off within these characters.  It’s no controversial statement to say comic book TV shows – and hell, comics themselves, often fail to capture more adult themes in the light they deserve, often substituting finesse and nuance with jarring edginess and overwrought angst.

Thankfully, this episode brings the grace and weight needed to every issue shown, without any extra baggage or sign that there is anything but care in inserting them into the oddity of show it is. These moments end up being incredibly powerful not only in the way they’re handled, but in how they creates a real emotional connection to these characters.

Production wise, this pilot also shines.  Direction, cinematography and lighting are such important parts of conveying the often sombre mood, and are handled with just as much care as every other portion of the show.  The soundtrack isn’t always the most memorable, but it pairs well with the emotion being produced in every scene.  Oh, and it’s got an absolutely banging opening theme, not to mention a great use of licensed tracks which makes the Titans soundtrack sound like amateur hour.

My only real complaint with this stellar opening episode is the effects themselves.  The necessary and ubiquitous CGI needed for characters like Rita, Mr. Nobody and Larry means that this show needs quite the budget. But it just sadly doesn’t have it, meaning that these effects frequently have the cheap-looking sheen of an obvious 3D CG texture.  However, the fact that my main criticism about the pilot is a budgeting issue should only make my love for this episode even more apparent.  And to be quite honest, poorer (but not terrible) effects were never going to shatter the quality of the storytelling and production going on around them.

The end of the pilot turns the levels of crazy back up to the classic Doom Patrol setting of 11, preparing us for this series to take us into levels of wild and unexpected storytelling you never see coming; just like any good Doom Patrol comic.  However, in spite of this craziness, the brilliant decision to make this pilot into the slower, quieter origin episode it needed to be, spending the time to establish each character, their disposition and their powerful tales of loss and recovery, means we’re already firmly invested in these characters.    Not only that, but invested in the fact that the stories to come will hopefully see them beginning to overcome the pains of their past and become a real superhero team.

Uniquely odd and human characters, incredible actors, strong thematic storytelling, a dark sense of humour and a delightful villain crafts the first episode of Doom Patrol into one of superhero television’s biggest successes.  It evokes a similar feeling to watching Daredevil or Legion for the first time; a feeling that you’re watching the next evolution of comic book television unfold before your eyes.  My love for these characters is matched by the care taken in every part of this production, and strongly confirms the fact that is a must-watch for anyone who can get their hands on it.

Doom Patrol is currently streaming weekly on DC Universe, and the whole series will stream worldwide on Netflix later this year.

2 Comments on Doom Patrol is “The Next Evolution of Comic Book Television.” [Episode 01 Review]