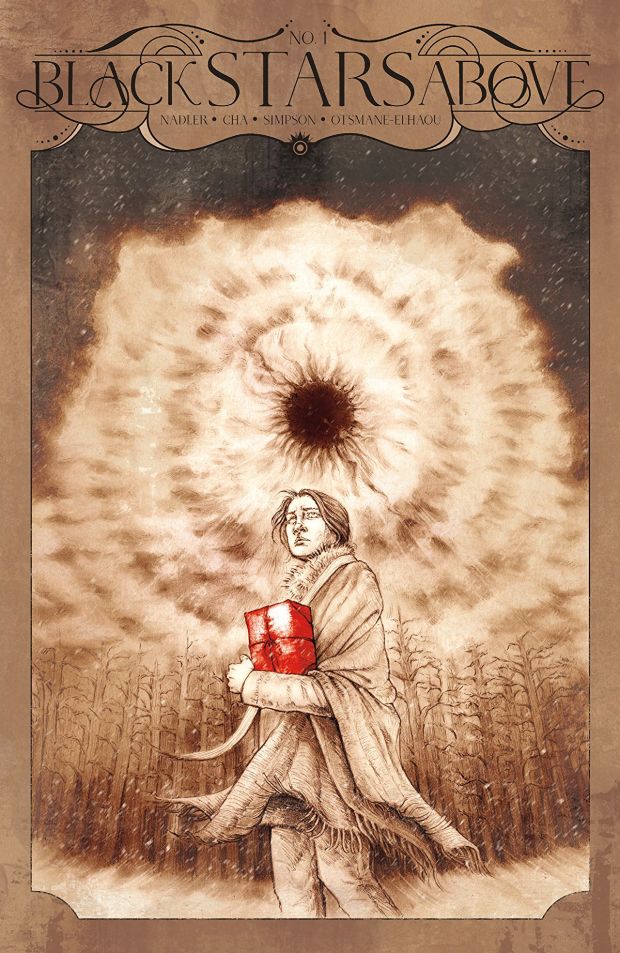 Canada in the late 1800s could be a harsh and brutal place to live. Eulalie Dubois has spent her entire life isolated from the world, tending to her family’s traplines, a life she longs to escape. When a mysterious stranger offers her an incredible sum to take a parcel to a remote village on the other side of the forest, this could be just her chance to escape to a better life. Something, however, is lurking in the woods. Something which is connected to the contents of Eulalie’s package; an ancient, eldritch cosmic horror that will push her survival instincts – and sanity – to their very limits.

I’ve been quite surprised with how hard it has been to write a review of this comic. There is so much going on that it floored me as to where to start. It is not that I can’t find anything positive to write, it is that I’ve really struggled to find the right words to do justice to Black Stars Above.

On the surface, this is very much a Lovecraftian story. There are some very definite and obvious references in both the writing and the artwork to Lovecraft’s realms, characters and even the haunting sounds experienced by Dyer and Danforth in those forbidding Mountains of Madness.

If you look below the surface, however (and yes, I’m about to commit Lovecraftian sacrilege) you’ll notice that the influences in the narrative, the structure and the humanity of the characters belongs to a different set of writers, ones that I personally think were better writers than Lovecraft. There is no doubt that Lovecraft defines the Cosmic Horror genre, but for me, the likes of Arthur Machen, William Hope Hodgson, August Derleth and Algernon Blackwood all transcend Lovecraft in their ability to create characters that are more solid and relatable, and ultimately who you care more about.

This, however, is not a story written by Lovecraft, or Derleth, it’s a story written by Lonnie Nadler, who I had the great pleasure of rating as my personal favourite writer of 2018. Nadler has proven time and again that he can take the basic elements that make up a story and amplify them, taking them to the next level. He can make the horrific truly horrifying, take that slow creeping dread and truly chill you to the bones, take a person’s mental suffering and make it tangible and visceral.

Whilst I’ll freely admit that my knowledge of late 19th century Canadian history is not on an academic level, I do know that it was a time of great hardship for those that lived off the land and this is thematic throughout this first issue. Ostensibly told through entries in her diary, we find Eulalie’s world decaying around her. The family’s livelihood is dying off, modernisation and gentrification of the local town is forcing them into deprivation and potentially starvation.

Eulalie is isolated, not just by her location but by her family’s fear of the outside world, of change and by the isolation that comes from being a mixed heritage woman in the late 1800s. The insidious sense of creeping dread and slow spiralling descent into madness that is a trademark of any self-respecting Cosmic Horror tale, is ever present; be it from the tall stranger (Nyarlathotep?) sending Eulalie on her journey, the mysterious darkness affecting both the animals and the woods themselves, or the ramblings of her grandfather that hint at a darker reason for the Dubois family’s need to maintain the traplines.

Jenna Cha is a new artist to me, but I’ve really enjoyed what she’s produced for this issue. She’s clearly at home with Eldritch horror, and in amongst some really nice work bringing Eulalie’s world to life are some striking, and at times disturbing, images that really catch you off guard.

What I particularly liked about Cha’s artwork was the way she captured just how claustrophobic and isolating being in the woods at night, in the middle of winter can be. It is dark, it is disorienting; sound is different, alien, and shadows conjure nightmares out of twigs and leaves. It can also be very beautiful and peaceful, even in the face of adversity, and Cha seems to carry this off effortlessly. Ok, so there are a couple of things that didn’t work for me, minor niggles, but nothing that took me out of the story or detracted in any way from the whole.

At the end of the day, this is a great first issue of what I think is going to be another hit series from Vault Comics, and on a personal note, I’m really pleased to be reading a new series from Lonnie Nadler. I can’t wait to see what the remaining issues have in store for us.