Introduced to me with a pitch of, “Breaking Bad in Mos Eisley”, I was definitely intrigued about Tartarus right from the get-go. However, after making making my way through the series to issue three, I have to take exception to this description. Not in a bad way; it just doesn’t even come close to capturing everything this is and has the potential to be. Cramming in storytelling and visual elements that remind me of everything from Jodorowsky’s Dune to Besson’s portfolio of work, while also feeling strangely reminiscent of Victorian science fiction like Verne, this series provides a strange but wonderful blend of futurism and nostalgia, am opium den dream of what was or is to be.

What started out as an action-packed prison escape flashes forward to shift focus to the daughter of the expected protagonist of the first issue. It’s a great bait and switch change of perspective which enables the team to set up the world with drama and movement and then dial back to provide more oomph.

Having escaped the devastation on Olympus Station, Tilde, daughter of the Warlord Surka, now finds themselves on Tartarus and, true to the form we’ve come to expect, things are more than a little sideways. Crashing into the middle of a gunfight, Klinzu is separated but manages to find his date via the galactic version of Tinder. So gunfights, swordfights, and date nights. It sounds almost farcical, but the team manage to effortlessly keep the plates spinning here and prevent anything from becoming pedestrian. With more opportunity to see just how weird Tartarus can get, the pay off at the end of this issue is meaty but left me with quite a few questions over what I’d just witnessed.

A good story alone does not a good comic make, however. Thankfully, the art direction here compliments the tone and the whole thing gives off a wonderful synergistic vibe. With immersive world-building dropped into every other panel, the look achieves to be somehow paradoxically detailed and blurred. It should be all over the top but the lines and colours anchor this in the realms of believable weird. A nod also to Campbell’s letters which, despite some heavy wordage, this being space opera, could have easily become difficult to read and balance with the action.

Tartarus started with a good, lengthy, issue which I would have been happy to have been recommended as something a bit different to my usual fayre. I’m almost glad though that I started late and was able to jump straight into #2 and #3 as it really seems to be building a head of steam. If archaic, anarchic space opera is your thing, I can’t see how you won’t enjoy this. 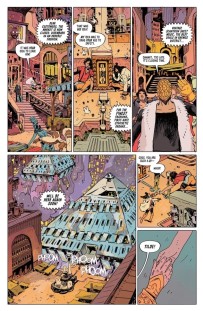