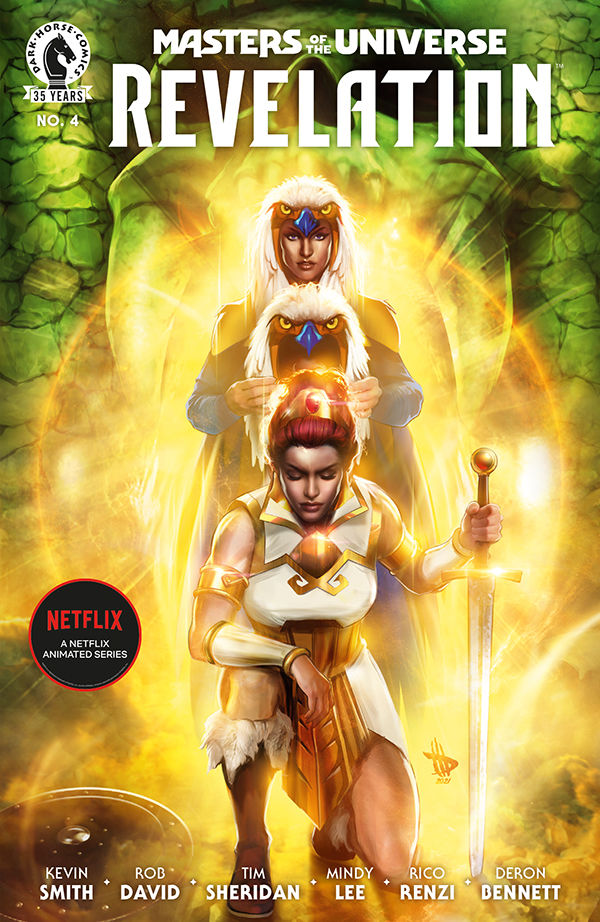 As we head into the final issue of Dark Horse’s official prequel series for the Netflix Masters of the Universe: Revelation show, it’s perhaps fitting that Teela finally takes her well-deserved place in the spotlight.  While her character development, motivations and (poorly-concealed) destiny have been key plot drivers in the TV show, she has barely featured in the comic book prelude – an oversight which Smith, David and Sheridan happily remedy here.

When we left things in issue three, He-Man and Teela had battled their way through Skeletor’s forces all the way to the throne room of Snake Mountain in an attempt to find a “cure” for the toxin which was coursing through the veins of King Randor, threatening to end the monarch’s life at any moment. Unfortunately, any actual action here is fairly short-lived, with the dialogue and plot once again moving things briskly forwards. That said, we are given some tasty little tidbits during this exchange, including Skeletor’s discovery about the secrets of Grayskull and an eyebrow-raising comment by Evil-Lyn about He-Man’s secret identity, all of which add yet more depth to the Netflix show.

The remainder of the issue is focused around the attempt to save Randor’s life. An attempt which, even if you’ve only seen the first few moments of the Netflix show, you will already know to be successful. No surprises in the outcome then, but the nature of Randor’s fate – and Teela’s role in it – is what really keeps the pages turning here.  We also get some insight into the genesis of Teela’s much-maligned frustrations which came out during the first episode of the show.  This really helps the eventual delivery, adding a lot more context to her throne room outburst which did admittedly end up feeling a bit out of character.

On the visual side of things, Mindy Lee’s artwork continues to fit well with the tone of the show, with her partnership with Deron Bennett resulting in some fun pages and dynamic scenes – including one particular Teela-centric splash page that I think will end up playing into the second half of the Netflix show in fairly big way.  Yes, it’s not exactly the rippling, chunky, detail-heavy style that some fans seem to prefer, but I’m personally rather enjoying Lee’s take on this universe, and I really hope this isn’t the last time we get to see her playing in this particular sandbox.

Ultimately then, as a cohesive four-part narrative I think it’s safe to say that this series has been a bit of a bust, only loosely hanging together with the “Orlax” storyline repeatedly failing to hold the attention.  However, as an anthology-esque series which helps to provide context, depth and character motivation for the events of the Netflix animated series, this definitely hits the mark. Sure, it doesn’t quite have the depth and twisting narrative of Eternity War, or the relentless fanboy enthusiasm of Tim Seeley’s MOTU offerings, but as a companion piece to the Netflix show, this is a series I can’t recommend highly enough.  Well worth a look, particularly with the second half of the animated show (hopefully) right around the corner.