Before I get started with my review of the final 5 episodes of Masters of the Universe: Revelation, streaming now on Netflix, I’d highly recommend going out and watching them for yourself.  It’s a quick, rewarding way to spend an hour and a half, and if you’ve ever been a He-Man fan in any way, shape or form, it’s certainly well worth a watch.

So, let’s get the main question out of the way… is it any good?  Yes, yes it is.  Sure, I already loved the series from its first five episodes, but from its emotional opening though every twist and turn on the way to its epic, Avengers: Endgame-esque conclusion, Revelation Part 2 kicks things into a whole new gear.

With its deaths and blood (and even a bit of slightly awkward sexual innuendo), it’s certainly far removed from the campy, superficial, but still thoroughly enjoyable antics of the ’80s original, although we do still get some nice cheesy moments and wonderfully groan-worthy gags along the way to keep us happy.

Mark Hamill gets a lot more to work with here, and is clearly having an absolute blast as Skeletor.  Yes, it’s difficult to not hear the Joker in his vocal performance, but he also adds a few unique wrinkles to the character to differentiate him from the Clown Prince of Crime.  Sure, he’s no Oppenheimer, but he still brings a lot to the role, including some great comic delivery – pretty much a must when it comes to ol’ boneface.

Narratively, Sarah Michelle Gellar’s Teela is still very much front and centre, which will likely annoy the same people who were annoyed by her very presence (not to mention her haircut) in Part 1. That said, the resolution of her long promised but never delivered destiny is surely something fans have been waiting for for years now, so seeing it finally play out on the small screen should bring a smile to a lot of faces.  Her voice acting perhaps isn’t the best at times, but she hits enough of the key moments to keep things moving.

Likewise, Lena Headey’s Evil-Lyn continues to command the spotlight with a stunning performance that is taken to a whole new level here.  Watching her character development journey throughout the course of these ten episodes is truly compelling, and she certainly gets a lot of meaty dialogue to sink her teeth into in this five-part finale.  Trust me on this.

Once again, Adam’s heroism really comes to the fore here, and the bulk of Part 2 seems intent on showcasing just how strong he is with or without the Power of Grayskull.  Chris Wood does a solid job as both He-Man and Adam, and like Hamill, while he doesn’t quite match the performance of the O.G. (in this case John Erwin), he more than holds his own in both the quiet emotional moments and the booming, heroic ones. 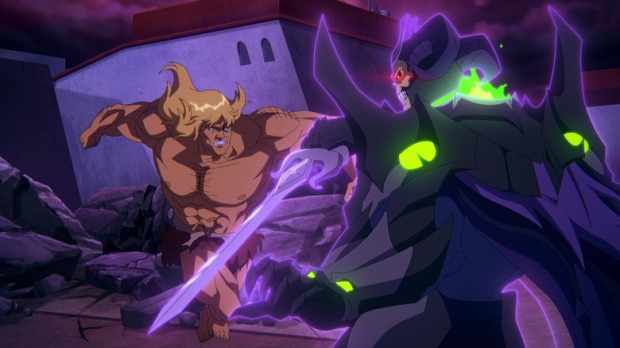 Frustratingly, some of the key moments in Part 2 have already been spoiled by the trailer, which I suppose isn’t a huge surprise given the way things are these days, but it’s still more than a little disappointing nonetheless.  That said, there are still more than a few noteworthy surprises that have been kept under wraps for the release.  I’m looking at you, Episode 3.

Readers of the Dark Horse Comics series also get a little payoff here, with the Orlax featuring prominently in the latter stages of Part 2, and Evil-Lyn’s origin story being recounted in animated form as a way to progress her already compelling character arc.  It’s a near little wrinkle that rewards prior knowledge without impacting the story itself, and I’m all for it.

It’s also worth taking a moment’s silence for the passionate and dedicated MOTU toy collecting community, who will likely be letting out squeals of delight at some of the new character designs we get to see throughout the course of these episodes, even if their wallets perhaps won’t share that enthusiasm.

The animation is of a suitably high quality throughout, particularly during the action sequences, of which there are a lot here.  Powerhouse do a great job adding some dynamism and creativity to the frequent skirmishes, with bold character models, fluid movement and a faintly anime-tinged approach that adds energy without going to the slightly silly extremes of the 200X Mike Young Productions version and all its weapon-twirling, endless-jumping glory.

One thing that muddies the waters a little in Part 2 is the strangely inconsistent ‘rules’ surrounding the magic of Eternia, which seem to change as the situation dictates.  It’s difficult to keep a track on what’s happening with the Power of Grayskull, its various rules, and the strength levels of its various wielders, but as with most of these kinds of situations, it’s probably easier not to think too deeply about it and allow yourself to be swept along by the story instead.

Honestly, at the end of the day, I can’t see how any self-respecting MOTU fan couldn’t find at least something to love about this series.  And while we’ll still likely have the same YouTubers and Outrage Grifters trying to twist everything about this series into a negative, this objectively feels like something of a redemption for the (mostly) unfounded criticism the show had dumped on it at the halfway point.

Is it perfect?  Absolutely not.  There are definite pacing issues and some ongoing tonal inconsistencies that are hard to ignore, but when it comes to sheer unadulterated fan service and delivering a high-stakes, action-packed love letter to all things Masters of the Universe, Revelation most definitely hits the mark.