I’m a big fan of both Steve Niles and Szymon Kudranski, so the prospect of seeing them team up for a brand new horror series at Image Comics most definitely piqued my interest. A Town Called Terror introduces us to Henry West and his wife Julie as the former is ripped out of the marital bed in the dead of might by strange men in skull masks. It seems that Henry has something of a complicated family history – a history he has done everything he can to leave behind – but now his estranged (and seemingly undead) father wants to speak to him again.

Visually, this is an absolute stunning issue, with Kudranski turning in yet another impressive horror shift, packing the pages with claustrophobic detail and suffocating shadows.  I’ve long been a fan of the realism that Szymon brings to his artwork, and that approach is on full display here, with every every expression and reaction feeling just the right side of photorealistic.

Niles clearly has some big ideas in story here, but the execution here feels perhaps a little disjointed compared to some of his previous work.  At the end of this first issue, I don’t feel like I actually know anything substantial about what’s happening, and while in some situations that could be a tantalizing hook, here it feels more like a missed opportunity.  The supernatural nature of Henry’s father is dropped right from the opening pages (which you can feast your eyes on in all their glory below), but isn’t touched on again for the entire issue, which ends on a mildly underwhelming “cliffhanger” of Julie crying over her lost (or should that be stolen?) husband.

One thing this book does have in absolute spades is a tense, unsettling mood. As I mentioned above, Kudranski’s artwork is intensely oppressive at times, and the stripped down colour palette of grays, blacks and reds really helps to give things a dark, Gothic appeal. Another thing the series has going for it is the aforementioned track record of its creators, and all the press material and interviews surrounding the launch of this series promise to take us on a spiraling journey into a whole world of horror.  As such, I’m definitely planning on checking out the second issue to see where they’re planning on taking us next.

A dark, unsettling feast for the eyeballs, A Town Called Terror grabs your attention from the first page with its striking visual style, and while we’re not quite there yet story-wise, I have no doubt that this series is going to take us to some truly horrific places before all’s said and done. 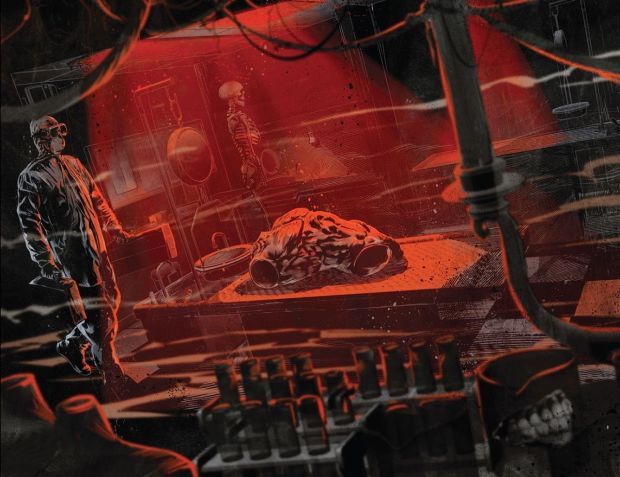