Tapping into the rich past of Doctor Strange’s early adventures during the Sixties, Jed MacKay’s chillingly claustrophobic script for issue nine Moon Knight must surely have pleased the majority of this comic’s audience with its combination of an enthralling, self-contained adventure, and its subsequent creation of a supernatural replacement for the heavily-bombed Midnight Mission. Indeed, having depicted Marc Spector being ‘vomited out’ of a haunted apartment block “like I was poisoned food”, MacKay pens an ingenious resolution to his narrative by having the somewhat out-matched, non-magical costumed crime-fighter make a deal with the House of Shadows so as to give them both a purpose in life.

Of course, to begin with it is far from clear that the Fist of Khonshu has encountered the Master of the Mystic Arts’ old foe from “a pocket realm near limbo.” Thankfully, this issue captures the reader’s complete attention simply with its mysterious depiction of Moon Knight’s four-day long journey through “an unnatural labyrinth” which, whilst providing air, water and shelter, doesn’t actually provide its eternally trapped visitors with any food. This precarious predicament is incredibly intriguing, especially when the weakened West Coast Avenger spies the shadowy forms of the sinister Sixth Floor’s other victims and unsuccessfully rushes to make physical contact with them.

Interestingly, Mackay also manages to imbue an oppressive and tense storyline with some flashes of much-needed humour. One such moment comes when Mister Knight complains to his psychologist, Doctor Andrea Sterman, that Reese can’t “stop going on about talking to a real super hero” like the Black Panther since T’Challa telephoned her. However, perhaps this book’s best instance is when the titular character attempts to convince Wong that he owes the masked vigilante a favour for previously joining “your Las Vegas devil-killing death squad”, and soon rather embarrassingly realises it is in fact the Spector who is in debt to the Tibetan monk.

Equally as enjoyable are Artist Alessandro Cappuccio’s efforts to add some extra horror to this comic’s sequences set within the maze of corridors and hallways. The Italian illustrator achieves this through the repeated penciling of animated skeletons, supposedly hiding behind every wall, picture frame and floorboard, to the point where some of this publication’s layouts disconcertingly resemble the Memento Mori of Medieval paintings. 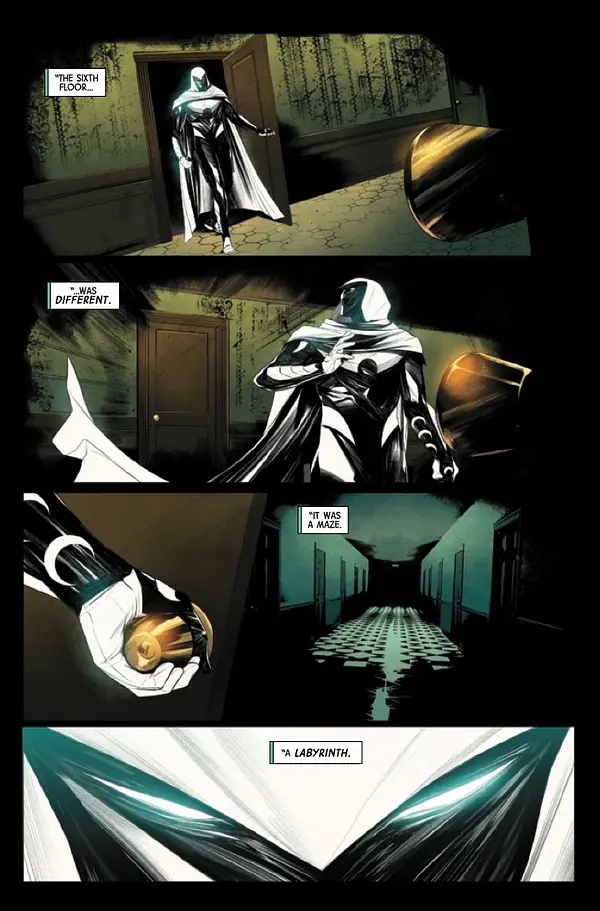