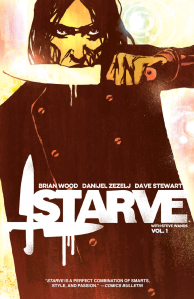 So, to help satisfy fans of the series who are waiting eagerly for the next arc to kick off in February – as well as to help bring those of you who may have missed out on this gem the first time around (shame on you!) up to speed – we were thrilled to be able to sit down and have a chat with the creative team about all things Starve.

Big Comic Page: Hi Brian and Danijel, thank you for taking the time to talk to us. Let’s get started. For those not familiar to Starve, would you care to summarise it in your own words?

Brian Wood: I usually describe it as a darkly comic take on celebrity chefs and foodie culture in a dystopia setting. That usually covers it, but there’s a few secondary layers to the series, such as the father-daughter subplot, how Chef Cruikshank is struggling with ideas of fame, of aging, his sexual identity, and figuring out what’s most important in his life, and how to resolve things with his estranged wife. And as we move into the second part of the story, there’s a lot in there dealing with poverty and a social movement towards dealing with food scarcity and equality.

So, that’s a lot going on! All that sort of combines to make this semi-futuristic, bleakly funny, and charismatic series. Aided in large part by the visuals.

BCP: When I first reviewed Starve I described it as Iron Chef meets The Running Man. It sounds absurd, but works brilliantly as a comic and it reads very well. Did you ever doubt the idea, or did you know it would work from the outset?

BW: I always felt strongly that this series would work, even in the early days when it just existed as a one-page pitch. I knew it, like, deep down in my bones. What was difficult was convincing other people that it would work, and it took many years to find the right publisher and collaborators. I’m thrilled that it worked out with Danijel and Dave – it couldn’t have happened in a better way. And while I still think the story is something of a sleeper hit, its one of the best things I’ve written in years. Maybe ever?

BCP: There always seems to be a form of social commentary in your work. Starve absolutely questions the consequences of cultural excess and mass media exploitation, and this is interwoven with quite a personal story of relationship and perspective through Gavin’s eyes. I’m curious; does your creation process start from the questions you want to ask in your writing, or do you create the story and mould it to the overlaying themes you want to portray?

Danijel Zezelj: One of the starting points for the Starve was social commentary on the contrast between media entertainment and the everyday life and struggle for survival of majority of people today. And it is specifically set in a city that resembles New York, so we are talking about a highly developed, glittering Western metropolis, not about a rundown marginal shanty-town. Irony is, the social split in today’s western world becomes as deep and extreme as it is in what we like to imagine as a very distant and so called Third World

BCP: Danijel’s art blew me away in the first issue of Starve (and every one since). I love how he uses shadows to define shape, and this style seems to reinforce the dystopian feel of the world in which Starve is set. Was this a deliberate creative decision, and how much influence does Daniel’s work have over the final product?

BW: I would say total influence. I mean, I can’t speak for Danijel, but I write the script in a way that allows him as much leeway as he likes in interpreting it.

BCP: That definitely has to be considered a bonus from the pair of you having worked together so extensively in the past. Danijel, was it important for you to have that level of control of your own work, and to work with a writer who trusts your artistic instinct so much?

DZ: It is really great to have such a vast space, and to work with Brian in a way where I could implement visually many different things.

Brian’s scripts are always vivid and inspiring and location/environment has important role in his storytelling. That’s why I voted for a story set in the present/near-future time and urban space. The intensity of the backdrop (megalopolis) conditions characters, they have to grow and breathe through their environment. Their conflicts, doubts and confusions are reflected in the urban chaos surrounding them. 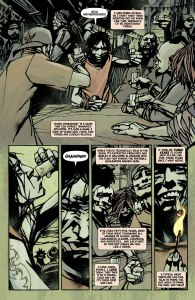 BCP: Did you make any adjustments to your artistic style from the likes of DMZ or Northlanders to help fit the ‘feel’ of this particular series?

DZ: With DMZ or Northlanders, which I both enjoyed a lot, I had to enter into the world that was already set, and it had its rules, scenography and characters. The difference is that Starve is our own project from the beginning, it’s a world we are creating together from scratch and that gives me even greater working space and creative push, as well as bigger responsibility. So I do feel more free with Starve, but also responsible for whatever goes wrong with it.

BCP: Brian, do you storyboard the panels for Danijel, or do you script what you want and leave it up to Danijel’s interpretation?

BW: I write an abbreviated version of my normal scripting style for Danijel. All the dialogue is there, but I leave a lot of the details up to Danijel, and the page compositions are 100% him. Similarly, Dave (as an amazing colorist and also as a co-owner of the book) has total freedom.

BCP: Danijel, your style is very distinctive, who would you say are your influences?

BCP: My favourite episode of Starve is issue #2. I thoroughly enjoy reading comics for entertainment, but I especially love when the subject gives me pause to think. The conclusion of that particular Starve challenge was like a slap in the face, not only does it brilliantly emphasize one of the running themes in the series without seeming preachy; it actually focuses the reader’s attention on that issue. Was this deliberate, and was the reaction to it (I’m going to assume you had some feedback) what you were expecting?

BW: I’ll give Danijel the credit for that – it was his suggestion to end that issue in the way we did, Gavin’s physical reaction. I had written something a little more triumphant, but once Danijel emailed me about it, I knew his idea was better. Way better.

BCP: What was your thought process behind choosing that particular ending for the issue, Danijel?

DZ: The idea was that if Gavin is part of the game then his criticism is hypocrisy – he accepted the rules and he is main part of the reality show. So there has to be a consequence for him, otherwise he is the same as the people he is spitting upon. And we wanted to believe that Gavin is not the same, that there is still hope for him. That’s also why second arc of Starve is very important (issues 6-10), that’s where Gavin is forced to make hard choices and deal more directly with issues of integrity.

BCP: I know that when writing DMZ you had no planned ending at its inception, but The Massive had a defined story arc. Do you know how you are going to end Starve, and how many seasons have you planned for?

BW: We’ve committed to a total of ten issues for now, which is two story arcs, and that will be a complete story. That’s not to say there can’t be more, but when you do a book at Image, there’s no real publisher safety net in the sense you have one at other companies. We can keep the book going as long as we like, but our ability or willingness to do that is connected to whether the book makes a profit or not. So we agreed to ten issues at the start in order to see how it goes.

BCP: Thank you for your time, I’m a huge fan of the series and am looking forward to the TP release in January and season 2 dropping soon after. Before you go, can you tease us anything about what you have planned for Gavin next?

BW: Well, we end the first arc with Gavin has something of a wake-up call, and is being pressed by his daughter to address some of the things he’s been running from. So when the story picks back up with issue #6, Gavin recognizes that maybe just kicking ass and winning Starve isn’t enough. Or rather, isn’t the best thing he can do if a change in society is his goal. So, as the ad copy says, he moves “from the soundstage to the streets” and addresses issues of food scarcity, “food deserts” (areas of a city where no healthy or fresh food is available to residents, only junk), and so on. Its more of a true move towards revolution than performing on a stage for rich patrons. And of course, hijinks ensue.

Starve Vol. 1 goes on sale January 13th from Image Comics, and the second arc kicks off with issue #6, set for release on February 17, 2016