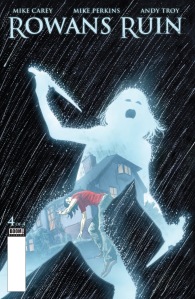 The story so far – Kate and Emily do a holiday house swap with American Kate coming to Stratford-Upon-Avon, and Emily going the other way to the States. Very soon Kate starts to feel the wrongness at Rowans Rise and begins to dig, and dig and see dead people using an empathic gift she has. The wrongness at Rowans Rise stems from a number of murders, of animals as well as people.

Issues one through three lead us through Kate’s visit to England, befriending the locals and doing a little more than just befriending a local bobby. They also lead us nicely through her investigation into the “wrongness” at Rowans Rise and her attempts to make things right.

Issue four leads on immediately after the final panel of issue 3, with Kate lying on her bedroom floor after being hit her very, very hard by Emily. Even at that point Kate doesn’t quite get it. It takes until the eighth page and a use of her gift to see the truth that most readers would have guessed at somewhere in issue two or three. It was ***** wot did it. If you have the first three issues the bad guy wont surprise you in the same way they did Kate. I’ll give Mike Carey the benefit of the doubt and go with the fact that it isn’t meant to be a shock for us, with the thrust of the story being about Kate’s reaction and not the reveal.

I’ve been impressed with Mike Carey’s work on Rowans Ruin to date, the dialogue throughout has been snappy and believable. Mike Perkins has held my interest with some lovely art. It really helps having a British creative team writing and drawing everyday British life. It feels properly authentic this way.

Something just niggled at me in the end though. Kate stays for the funeral of a close but relatively new friend that she has known for a matter of a few weeks. This is after the revelation that Emily had already killed Kate’s parents back in the good old USA. Is this a realistic reaction? I’m not so sure, especially when we were shown in issue one that Kate has a good relationship with her folks. It doesn’t ring true to me. Maybe the police wouldn’t let her leave the country earlier… I don’t know. Anyway, for that reason… 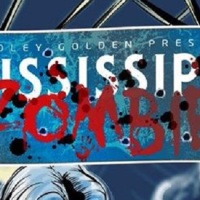