OKIf you’re a long time Geeking Out fan, you’ll know we like to spend our summers gaming, and to spread the geeky love with summer gaming giveaways. With Gaslands: Refuelled coming September 19th (LINK), now’s a great time to get into the toy car-nage or expand your collection.

So we thought we’d get you started, with a great big Gaslands Get Going Goodie Bundle to be won, right here, right now! But first, let’s think about time.

Now many of us may love to game, but time is a precious thing. And for all that I love the hobby side of things, sometimes, you want to take a short-cut. So this time I’m looking at things to make your life easier, getting your hobby experience up and running, or generally just enhancing the whole look for minimal outlay.

Now you can, quite reasonably, use regular dice for Gaslands, or just pop stickers over the numbers. However, I find that kids forget which number represents which result, and stickers peel just far too easily. So, I took a trip over etsy, and swung by Laserforge

I’ve mentioned Laserforge’s stuff in the past; their templates and tokens are, for the UK market, pretty much unrivalled. In fact, I was so impressed that I put my money where my overly large mouth is, and bought a set of their Gaslands dice. £10 delivered in literally any colour combination you can conceive.

I went for red dice, yellow text and couldn’t be happier. The dice are well-weighted (which can be a real issue with custom or 3D printed dice) and well-finished, smooth and neatly painted. A worthwhile investment for sure. 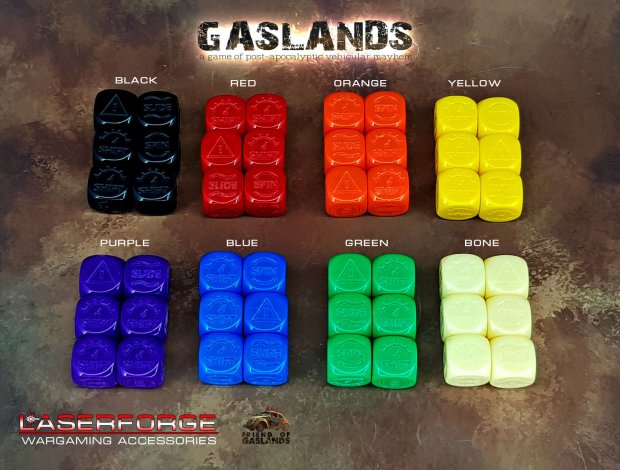 Another issue we face is interminable scraps of paper covered in vehicle profiles. Well, never fear, the fine folk at Dashlands.com have come up with rather marvellous Dry-wipe Vehicle Dashboards:

£14.60 gets you 36, more than enough for your most ardent of Gaslands needs. As if that’s not enough, we also had the joy of the new Sponsor-specific cards:

These minimise a lot of the clutter, keeping everything squared away nicely. They’re particularly handy if you’re not a fan of tokens across your tabletop – I love a nice acrylic, personally, but I get that some people don’t – and that can be considered money saved too.

I have, as my wife, kids and really anybody will tell you, too many unpainted models. Frankly, sometimes, the sea of unpainted metal and plastic is unbearable. However, up-and-coming terrain company Kitbashbox have come up with a genius solution – specifically, a solution of vinegar and salt.

So want your models to smell like a chippy? Well, not quite. However, what kitbashbox offer is resin terrain elements pre-coated with an oxidising powder. All you have to do is leave them dipped in vinegar for a few hours, and then expose to the air: 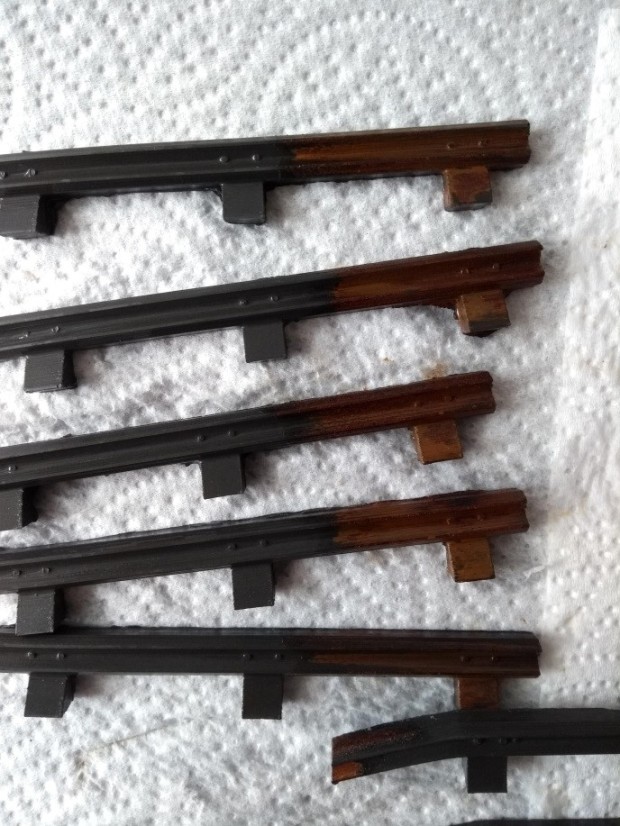 And if you fancy, do it once more:

Here you can see the contrast between 1 and 2 dips.

My older son gave the barrels a scratch first with a modelling tool. He loved doing this, then dropping it into the tub of vinegar and watching it fizz and pop. Fun with science kids! Once they’re suitably mucky, a quick spray of matt varnish and you’re done.

But why stop there, when you can have rusty containers too – plain resin, rustable or even pre-rusted!

(Flat pack prices are the same at coffin versions but you can only get coffin versions in the rustable or rusted sets. Each set has 1 end panel and 2 door styles roller shutter and detailed doors.)

Now it may be that you love the idea of Gaslands, but just have no idea where to start (or no small children to steal from). And that’s where customisers like Camkierhi Creations step in. For between £2 and £5, you can find yourself with a lovely lump of crud:

Either Weapons attached, as above, or ready to be upgraded further:

Given that a standard 50-can team is typically all of 2 or 3 cars, you can be read to race with change from a tenner, or a couple of teams and scatter terrain for a good deal less than your average boardgame.

BACK TO BRASS TACKS

Then again, you might be looking for a comprehensive way to get snazzy for the post-apocalypse. Secret Weapon have a record of making extraordinary pretty things, and whilst I don’t normally cover US suppliers, these are worth the postage because… day-um:

Just SO pretty and versatile. $15 for a set is very fair. Yes, you have to cover the tax if you’re getting them sent to the UK, but they are totally worth it, especially if you’re at the precision/obsessive end of the hobby! And at that point, you might as well order a few sets… Here’s my own paltry efforts:

And with a lick of paint:

As if you didn’t know I love a bit of bat.

They’re very easy to use. I’ve had run-ins with brass before and have found it fiddly and irritiating. But not only are these easy to remove from the sprues, they are easily shaped and constructed (in the case of the rams etc). Like the look of them? The code ONE10 will get you 10% off your first order! We’re awfully kind to you…

With all this new stuff, what you really want is… new rules! Well, Gaslands Refuelled is coming in September, and we were lucky enough to get a preview copy of it from the fine folk at Osprey.

First of all, this is NOT a second edition. It’s a tidier, clearer rulebook, but does not supplant the original Gaslands.

What’s immediately obvious is that this edition has much, much better layout – for example, the fact that you pick up a hazard when you change gear is front and centre here – this isn’t actually that obvious in the original edition. Generally it’s much more spaced out, with key points in separated, blue text that makes it very clear indeed. The template quick reference table is also excellent, and there are multiple worked examples of activations, interrupted movement and collisions.

The separation of basic and advanced vehicles/weapons is great, as it simplifies and streamlines the games. This adds, tweaks, pokes and prods the rules from both Gaslands and TX, along with a couple new additions (a variety of exciting new dropped weapons and WALL OF AMPS!!!) and some logical reorganisation (Mishkin Vehicle Upgrades are no longer in Perks, but in the Vehicle Upgrades section where they should be!). We also have rules for Ramps (huzzah !) and they’re clear, simple and obvious, just the way things should be.

The sponsors have also had a bit of an overhaul (e.g. Slime rams don’t take up build slots any more , and I play Slime so I am a very happy chap), with the sponsor section now before the scenarios – far more logical. And, as well as the Sponsors from TX (Highway Patrol and Scarlett), we get a variety of completely new ones! Verney is about mashed-up vehicles and dropped weapons, Maxxxine about pulling off crazy spins and slides, Inferno set fire to everything including themselves, Beverley the Devil is a team of ghost riders, and the Bootleggers are literal trailer-trash. The only thing more exciting than having the new sponsors and perk classes is thinking of new ways to modify toy cars. Which is, of course, the point.

When it comes to playing the game, there’s now a variety of new ways to do so. Classic Death Race is there, but now with added Team and audience reaction rules. More generally, game types are split into Televised, Wasteland and Special Events. Different degrees of complexity mean done are simple carnage at one end, to an app to track results for the new Saturday Night Live.

Wasteland Skirmishes take us into the ruins of the desert Earth, and this brings an excellent level of Max action to the table, widening the scope of the game as a whole (Zombie Bash is out there now, too). I really like the Scavenger rules, and the addition of giant radioactive creatures are a particular highlight – who doesn’t want to play a game of Cadillacs and Dinosaurs, after all? There’s also full campaign rules, including the War Rig campaign and TX-4 rules, but also more wide-ranging rules for Televised Seasons and supporting the Earth Resistance – remember. Mars is a Lie, folks!

Finally, there’s revised quick reference charts (and dashboards) for absolutely everything, again much better in terms of layout and design.

I’d say that, if you have regular classic Gaslands, you don’t NEED Refuelled… But I’d be lying. It’s great, a tremendous revised edition. It’s a great place to start as a new player, but more than that it’s the collated, streamlined, gas-guzzling lump of filth we’ve been waiting for.

So how about that prize?

Well you could win yourself:

So how do you win this whopping great bundle?

Well, as it’s summer, it’s all about being social:

(3) As always, sharing and tweeting gets you bonus entries!

(4) A bonus entry for the like-share two-step on our Hot For Hellboy article (go on, it’s worth a read)

(5) AND another bonus entry if you follow our new Instagram @insta.graven! We have the technology! We’re just not sure how to use it…

Remember, if you’re nerd shopping in general, check out our friends Element Games and use code SAM4132 to earn DOUBLE store credit and try and snag a bargain!

And, although the contest is open to our readers worldwide, if you win and are outside of the UK then sadly we cannot cover postage. Tsk. Cheapskates.

The winner will be announced on Sunday the 18th of August.

So good luck, and keep Geeking Out!

3 Comments on Geeking Out – Gaslands Refuelled Reviewed and Get Going Giveaway!