I love and hate Overwatch in equal measure. The game has become a toxic cesspool of bad balancing, but the characters are so likeable and the world is expertly designed to appeal to pretty much everyone. Anyone who gives this franchise any sort of attention, player or not, will undoubtedly find a character or story arc that resonates.

The game is fundamentally a 6v6 characterised shooter with no campaign or story mode. Once a year we are treated to a story event where we get a single mission to play through, adding more background to hinted moments in-game. All in-game lore is delivery through snippets of dialogue and these annual mini-missions.

However, Blizzard/Activision have wisely opted to branch out with the franchise, broadening the narrative, timeline and scale of the events by creating digital mini comics and the truly spectacular animated shorts. So far, everything – with the exception of the Overwatch 2 teaser – has taken place in the past, padding out the admittedly patchy timeline, and today I take a look at their latest comic book outing, “Tracer – London Calling”, from Dark Horse Comics. 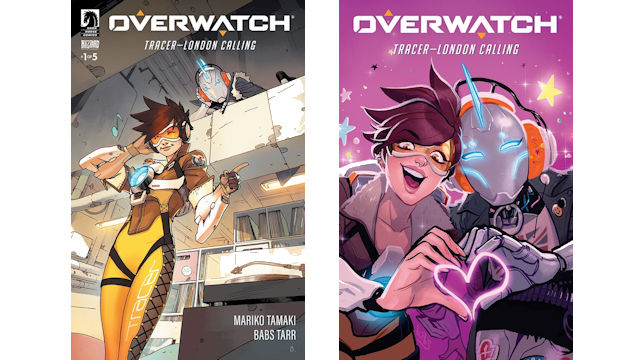 For the first time in psychical print, we have a peek into the past life of flagship character Tracer with Overwatch’s 17th comic. Following the ratification of the Petras Act (in other words the breakup of the Overwatch team), she is now street-level hero saving the locals from minor crimes.

In the world of Overwatch, London is a hot spot of distress. After the assassination of Manyatta, the anti-omnic propaganda is at an all-time high with many of the robotic residents living in an Underworld.

The story centres around Tracer being lost within herself. She was known to be a hero as part of the now defunct Overwatch. She was a somebody, she was a hero, but now she is disgraced and a outdated symbol of what used to be hope. This timeline, while messy, is assumed to be 5+ years after the breakup. Tracer, who insists she is now Lena, is trying to live the normal life. Joining her partner for takeaway dinners and trying to keep busy, describing herself as a part-time hero.

It’s rare in Overwatch that we see our characters happy. The warm setting and colours really bring a charm to this scene, complimented well by the character design of Lena herself who is always full of joy even in the heat of battle.

The Underworld is a hive for the “second-class citizen” Omnics. After the King’s Row incident (see the Tracer vs Widowmaker animated short for more info), tensions are running high. The Omnics need basic supplies to survive and yet these are being denied. Tracer spends some time with the Omnics and this is very much the joy of the entire issue. Below is a panel that bought me a lot of satisfaction. The art by Babs Tarr is very in tune with the Overwatch world and keeps a lot of the same charm. The comics mirror the game strongly with Easter Eggs such as photos and notable locations along the way, and some great attention to detail.

Unfortunately, this opening issue faces the biggest problem that many fans, myself included, have with Overwatch as a whole. The lore is scattered. The timeline is a muddled mess. Some characters have no lore at all (I’m looking at you, Zenyatta), and the developers have seemingly dropped the importance of the lore which a great many fans magnetised to.

Don’t get me wrong, this comic is perfectly serviceable and adds some welcome humanity to Tracer, but in the larger scheme it really adds nothing in terms of significant change or development. We basically knew everything about this comic without reading it. Future issues, which you can already read digitally on the Play Overwatch website, add a little more, but nothing with true substance, just small background events.

This is very much a comic that should have been released prior to the game’s launch, not  during its dying days. Overwatch fans are in limbo currently. We had an announcement a year ago for the next game which has a very narrative-centric trailer, but we still know little about many of the big story events and this comic adds little incentive for the future. As such, this is very much the right comic at the wrong time.