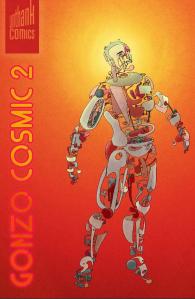 The second chapter of Garry Mac’s creative labour of love hits a lot of the same notes as the first issue. Once again, Gonzo Cosmic has the all hallmarks of being a fairly straightforward story wrapped up in a sprawling, mind-bending package, and therein lies the innate appeal of the series – dizzyingly creative takes on familiar storyline beats. While the first issue took us from swashbuckling hijack action to high-concept sci-fi surrealism, this issue takes deals with what is, essentially, a superhero origin story – albeit a gob-smackingly high concept one.

Once again, Garry’s artwork shines in its detail, particularly when it comes to his boundlessly creative character design.  There are some stunning, poster-worthy splash pages contained within this issue, and as surreal and mind-melting as some of it may be, Garry makes sure to retain a grounded sense of relatability with his wide-eyed human characters. The quality of the colour work in the latter part of the issue does dip ever so slightly, something which is only really noticeable when you compare Garry’s own efforts side by side with the typically flawless work of James Devlin. No shame there then, as Devil is quite possibly the finest colourist north of the border right now.

Interestingly, Garry has opted to make the entirety of this series available completely free, due to a myriad of reasons both creative and commercial, the details of which he covers in this blog post. It’s difficult to fault his thinking, as – by his own admission – he’s not a salesman, and making his story available to anyone who wants to experience it will hopefully overcome the potential difficulty he may have encountered in pitching such an ‘unconventional’ series to the paying public.

Gonzo Cosmic thrusts us into a living, breathing world with some bold storytelling choices and interesting, multi-dimensional characters. Each successive read (I’ve currently just finished my third) peels back another layer of the narrative, adding a new perspective on the events which are unfolding. Garry has previously made his love of Grant Morrison’s work well known and, without overstating things, there’s definitely a lot of Morrison on display within these pages. This factor will likely appeal and repulse the very same people who are divided on Morrison himself, as those who struggle to find cohesiveness and relatability in the iconic Scots author’s work are unlikely to be convinced to give a title like Gonzo Cosmic a try. I should clarify however that this isn’t just a young creator trying to ape his icon, as Garry makes sure to stamp his own unique mark on the story, giving Gonzo Cosmic its own unique identity rather than merely being ‘Morrison lite’.

This is intelligent, thought-provoking sci-fi with near limitless potential, and while the density of the concept and complex nature of the delivery may be off-putting to some, those who take the time to absorb what’s on offer here are in for an absolute treat. Perhaps the most exciting aspect of this series however is the fact that it’s obvious we’ve only barely scratched the surface of the story to come. So strap in, sit back and let Gonzo Cosmic blow your mind.  Trust me, you won’t regret it.

You can grab yourself a digital copy of Gonzo Cosmic #2 absolutely free by clicking THIS LINK.