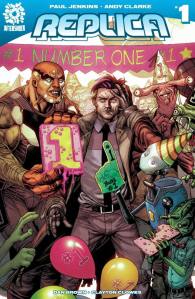 Replica is the inaugural title from Aftershock Comics. I have two winging their way to me; one to be hermetically sealed in a box for all eternity and bequeathed to my grand-kids, and one to read. It’s a solid opener, for sure. Cool buddy story with a twist? Check. Good art? Check. Good SciFi? Check. Downright funny? Check. You might argue that it’s the softer entry of the two titles released by Aftershock to date, but this is the one that I think will have the broader appeal.

Replica follows the story of Trevor Carter, human cop. Unfortunately for Trevor, he’s based at The Transfer. The Transfer is an ancient monolithic structure in space that serves as a nexus point for thousands of systems. As with any crossroads, settlements arise. It’s just that The Transfer happens to house millions of species, and he has to police them under human law, but with a team of aliens. So, yeah, this is a Cop – Buddy story, but the twist is Trevor hates all the aliens he has to work with. Well, perhaps hate is too strong a word, let’s say he’s not their biggest fan. None more so than Lieutenant Vorgas, who is – to put it bluntly – an idiot.

To add to his woes, Trevor he has to answer to his hard-ass boss Commander Stolteh, who is of the ‘like it or lump it, but make it work’ camp. It’s hilarious, and hilarious is hard to do in comics.  So in a fit of desperation, or madness, or perhaps enlightenment, Trevor sees an ad for cloning and decides to get it done. If he can’t rely on his team to help with the Police (and paper) work, at least he can rely on a clone of himself, right? What could go wrong? Only a slight technical issue that accidentally created more than one clone. A lot more. North of forty, in fact.

This is the genius of the story that Paul Jenkins (Wolverine: Origin, The Incredible Hulk) has created. He has already introduced us to a slightly twisted procedural/buddy story, and I’d have been happy with that. Now he’s injected a unique element into it, and it’s something that he can have a lot of fun with. It’s obvious that each clone has a different personality. Number 2 has identity issues and wants to be called Roger, number 12 is a full-on military hard-nut, 3 and 19 are wasters shirking off the job… and I absolutely love it! What I think is great about Replica is that it’s going to be a story of relationships. Not cutesy couple relationships, but dynamics between characters. Having so many clones gives Paul Jenkins a lot of creative freedom to explore the nuance of all Trevor’s personalities, plus his working relationships with the alien team members. All this and he still has to keep the peace on The Transfer. There is just so much potential here to exploit.

Andy Clarke’s (Batman, Judge Dredd) artwork does an excellent job of giving a sense of grandness to The Transfer. The use of negative space is not employed in Replica. Every square inch of panel is drawn or coloured, and by doing this you get a sense of space, or lack thereof. Remember, this is set on a structure that houses millions of beings, so there is a real feeling of constraint evoked through the art. Even the panel layout imposes this notion; the panel borders are in thick marker and the spacing between frames is tiny. Andy uses a lot of long rectangular frames, and when viewed on the page it looks like someone is trying to press them all together. It’s a clever use of design to intuit a feeling. For me, the triumph in his work is his facial expressions. It can’t be easy to transpose a looks of surprise (for example) to an Alien’s face, but he has managed this brilliantly. There is potential for hundreds of Alien races in this story so it’s no easy task to not only pull this off, but to do it well.

Replica is a great debut story set in a world with bags of potential to exploit. Not only has Paul Jenkins set up an interesting story, he’s presented it in a way that is damn funny – something that is not easy to do in comics. Andy Clarke’s art is a great marriage to the story, getting a former Judge Dredd artist is, I think, a real coup. He can use his past experience to deliver on Paul Jenkins’ great script. If InSEXts wasn’t enough, this confirms it – Aftershock comics are now firmly on my radar. 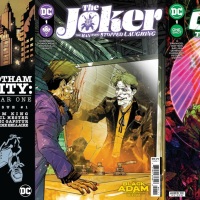 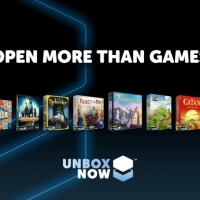